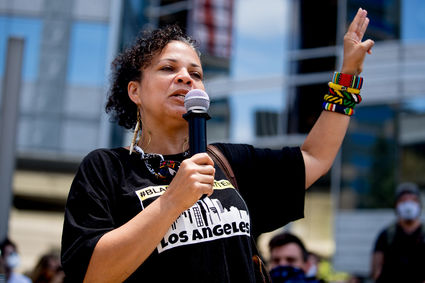 Los Angeles City Councilman Mike Bonin's Town Hall on "Reimagining Public Safety" provided no workable answers but plenty of insults to his constituents on the Westside. The panelists suggested reducing the police budget in LA to roughly 3 percent of what it is today and labeled immoral anyone who would call the police to handle a violently mentally ill homeless person. And that wasn't even the worst of it.

​Bonin held the virtual town hall on Monday night and left the agenda up to Black Lives Matter-LA and People's Budget LA. He stated the concept was to "make a forum for those voices to be heard in my district." Bonin was under the impression that these voices are rarely heard on the Westside. As if anyone has been able to avoid BLM and their demands, with their signs spray-painted on looted stores, calls for their support on Instragram, and emails from every organization to which you belong assuring you they have donated to their cause.

​The six panelists were comprised of BLM-LA leadership and members, including Dr. Melina Abdullah, co-founder of BLM-LA and department chair of Pan-African Studies at Cal Sate University LA. Other panelists were mostly academics with PhDs, and many were also leaders of other community organizations. Two white people who live on the Westside were included, apparently in an effort to allow white folk (because only white folk live on the Westside, right?) to be able to connect.

​After spending over an hour lecturing unenlightened white citizens about the "fact" Angelenos want to see a drastic cut in police and presenting ideas about eliminating police from such tasks as traffic violations and domestic abuse, the floor was opened to questions messaged in electronically. Moderator Carol Costello decided to present the most difficult question first: "What if I don't support BLM and want more police and enforcement?"

​In a classic demagogue move, Abdullah deliberately misunderstood the question. Instead of accepting it as it very obviously was meant, that the asker did not support the Marxist, white-shaming organization of Black Lives Matter, Abdullah chose to pretend the questioner did not believe that the lives of black people matter. "You don't want me to say on camera what I say to people who don't support Black Lives Matter," she said. "You're revealing who you are," she told the questioner and explained they devalued black lives. After thus evading the necessity of having to explain why someone must support her radical organization, Abdullah ended with, "I said that as nicely as I can."

​The other panelists laughed nervously at this point, but they were happy to go along with Abdullah's deliberate miscast of the question. Panelist Ricci Sergienko, one of the white Westside residents, said the question was "a very silly thing" and "it's 2020." He concluded with "maybe society isn't the best place for you."

​Panelist David Turner concurred. "There's some questions about your morals."

​Having effectively dispatched the hapless individual who had dared balk at supporting BLM, whose true advocacy for black lives is questionable given their complete disregard of the lion's share of black lives lost - those to violence within the black community - the panel moved to the next question, read by moderator Costello.

​"Who would respond to a violent homeless person?"

​A much larger nuclear explosion ensued.

​"Why are people calling the police on people just because they don't have homes?" Abdullah exploded. "I used to like visiting the Westside. But both of these last two questions have been A-hole questions." She explained, "We want housing and services for people who need housing and services." With a contemptuous laugh, she added, "I am sure you have good people in Mike Bonin's district. Let's have questions that have been offered by people who are not complete A-holes."

​At this point, Mike Bonin looked pretty distressed. Melina Abdullah had just insulted every constituent in his district, people whose vote he was going to need in the next election.

​Three other questions were asked, mainly about how the money and resources taken from the police would be managed. At the end, Mike Bonin attempted to regain the good will of his constituents with a concluding statement regarding their basic decency, a decency Abdullah had claimed utterly lacking. "Tens of thousands of people on the Westside took to the streets to protest," Bonin said, trying to remind Abdullah of those who had swelled the ranks of her protests in May and June. "For many, it was the first time they'd been to a demonstration." Bonin praised his constituents for waking up to the impacts of systemic racism and learning that the experience of people of color is different, especially with the police.

​But in the last 14 seconds of the meeting, Abdullah - utterly disregarding Bonin's apparently too-subtle attempt to silence her vitriol - demanded her own conclusion, elbowing in to get the last word. "Some of these questions indicate the problem is much bigger than reimagining public safety." (IOW, You thought you were going to slip by with merely losing your police force? Think again.) "We need to talk about dismantling white supremacy. It's a lot for black people to be responding to questions that white folk don't see as racist but are." She urged the unenlightened listeners to, "Do some unpacking. It's everybody's responsibility to do this work."

​In all, it was a disastrous evening for Bonin, who already faces passionate hatred from some in his district for his leniency regarding violent and unsanitary vagrancy and his indifference to rising crime.

​Melina Abdullah should not consider running for public office. But her behavior and policy recommendations make it clear she believes she will not need to do so but will instead be installed as dictator at some point after her organization has turned the country Marxist.