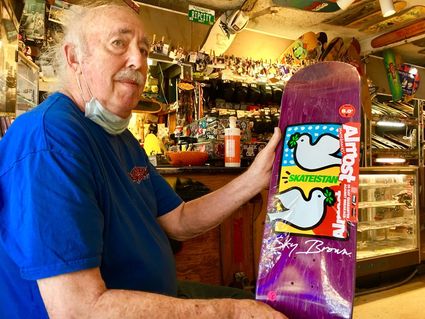 Jim McDowell and William Poncher were very serious when they opened RIP CITY - a skateboard shop at 2709 Santa Monica Blvd on April 1, 1978--April Fools Day . They were semi retired , and had come to California in the 1960's .

Skateboarding began as a sport in Santa Monica in the 1970's and their shop was at the end point of Route 66, which began in Chicago and snaked its way across the country.

They do not advertise, but yesterday a middle aged man from Minnesota, a family with 3 children and assorted youths came into the shop.

It specializes in service, the assembling of boards, the installation of bearing, the use of grip tape.

The boards, with a huge variety of vibrant designs, are made in China and Mexico, the T shirts/hats and other accessories in downtown Los Angeles.

The 600 square foot space is a explosive profusion of colors, designs, signage, boards pasted on the ceiling.

A happy place in a troubled times.

Rip City participates in a project in Kabul, called SKATEISTAN- Those skate boards are manufactured by an American Company called Almost. THE goal of this project is to raise money for girls to buy skateboards, because they are not allowed to ride bicycles. 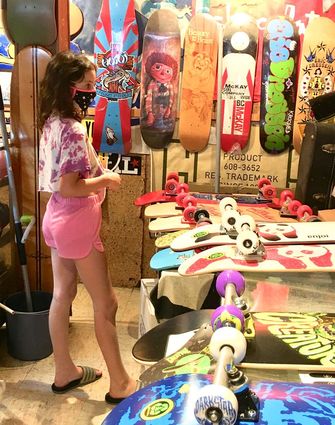 The Santa Monica Brewery designed a special beer to commemorate the shop's long existence. It can be purchased there. The label reads RIP CITY SKATES IPA.

Sometimes life changes. The building RIP City occupies was to be torn down in Oct 2020, but it will not happen.

ZJ Boarding House, another skate board store on Main Street in Santa Monica, closed Sunday. There was little advance notice of the closure. ZJ Boarding House was opened on December 16, 1988 by Mikke Pierson and Todd Roberts. The original name was Zuma Jay Surfboards and the shop was affiliated with Zuma Jay's in Malibu. The original shop was about 2000 square feet and occupied the front of 2619 Main Street. Roberts lived in the office at the shop and Pierson lived in his RV in Malibu.

ZJ produced events, contests and sponsored young skaters and surfers. It will be missed.