Progressives Want to Pack More People into California to Increase it's Political Power, While They Can't Provide Services to Those Already Here 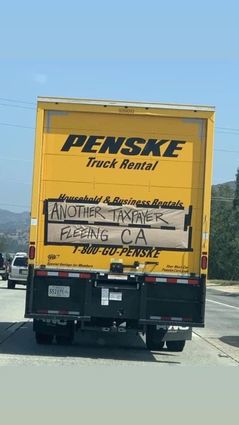 "Another Taxpayer Fleeting California on the back of a moving van.

Power outages due to lack of supply affected nearly half a million customers in California last weekend. The shortage of available power was at least in part due to the state's commitment to clean power, closing fuel-generating plants and investing in unreliable solar and wind power. Almost a year ago, the California Independent System Operator, the nonprofit agency charged with maintaining the power grid, had warned there would be shortages this summer. Nothing was done about it.

And yet the state that cannot maintain power to the populace it currently has, thinks it is prepared to bring in an additional 1.8 million residents by 2029, dumping 75 percent of that number in Southern California.

This number was concocted by the unelected California's State Department of Housing and Community Development (HCD). The number of projected new California residents appears to bear no relationship to reality on the ground. There obviously does not exist enough infrastructure to support this number of new residents. Furthermore, no planning is being done to supply this missing infrastructure. Roads are already over-crowded and ill-maintained to the point of near uselessness. Over a third of the state is currently experiencing drought. And the state has not planned for sufficient power to supply even the current residents. What power exists is shunted over aging overhead transmission lines that are inexplicably still used over areas prone to wild fires.

According to KCBS, California Governor Newsom bemoaned the power outages as "unacceptable and unbefitting of the nation's largest and most innovative state."

Is California really "the most innovative?"

It certainly has some of the most regulations, many of them dealing with environmental wish lists. In 2007, the state decided to commit to a clean energy initiative, vowing to reach net zero in both residential and commercial usage by 2030. But the government's requirements for the use of solar, wind, and other green energy outpaced the technological ability to produce such power, or at least enough of it at prices customers would be able to pay.

Innovation only gets you so far when it is instituted from above, proclaimed by fiat from governing powers. Inventions, such as better solar power, don't manifest themselves just because some government entity wants them to happen. Even if they do happen, they are not necessarily financially feasible. Rather, innovation works when it comes from below, from inventors and entrepreneurs who seek their own personal success. These risk takers compete in the open market where only the ideas that are worthy, financially viable, and desired by consumers gain investors and become successful.

The State of California would be healthier in every way if the government would get out of the way of the future rather than try to create it. Allow the market to decide who and how many people will want to pay the prices necessary to live in an area with good weather, beaches, and a casual lifestyle. End all construction of "affordable housing," which only exacerbates the shortage of housing and drives up prices for everyone else. Encourage green energy when it can prove itself reliable and plentiful at prices less than customers pay for traditional energy sources. Not before. 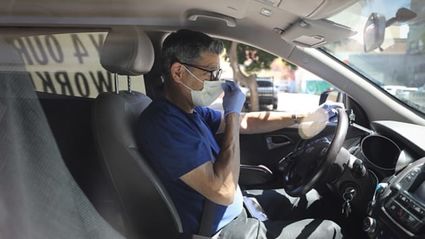 An Uber driver adjusts his face mask. Both Uber and Lyft have left California this week, citing AB 5

Nine land use bills are currently up for consideration in the "most innovative" state legislature of the country. Together, they seek to force upzoning on nearly every residential neighborhood in the country and include numerous provisions for the inclusion of "affordable housing." The stated goal is to provide enough housing for the 1.8 million number issued by the HCD, a number that includes the current homeless population of the state. Each of these bills is wildly irresponsible in their confiscation of local control and in their absurd presumption that mentally ill meth addicts are moving into housing they could not pay for even at highly subsidized rates. But most of all, these bills are utterly reckless in their disregard of the lack and decrepitude of essential infrastructure to service the population currently residing in the neighborhoods our elected leaders seek to destroy.