Look, you gotta have chips, right? And don't forget the beer, Mr. Bear! 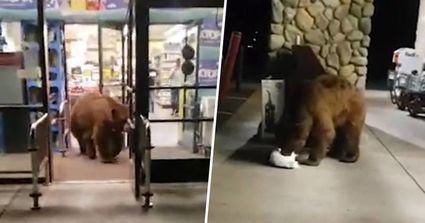 Not only did the bear not pay for his lunch, he wasn't even wearing a mask.

Some days you eat the bear, and other days, the bear eats your Tostitos.

A California brown bear weighing some 350 lbs walked into a grocery store in South Lake Tahoe, California on Thursday night. He was filmed by a woman named Adina Baidoo as he strode out of the market, not even offering to pay.

"Okay, so for really real, this bear – this actual bear right there that I almost walked into – has gone into Safeway and has decided that he's going to go shopping. I was on 50 totally with my high beams on the whole time and hoping to not get a bear," she said, apparently meaning she was speeding and hoping she would not hit the bear.

Personally, I get discounts for presenting my Ralphs Club Card. Not only did no one ask the bruin for his discount card, but no one questioned him for not wearing a mask. Call it brown bear privilege, if you must.