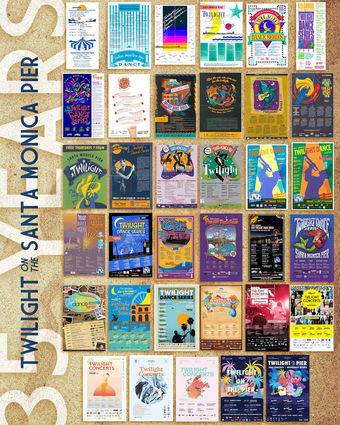 For 324 weeks over the past 35 years music has filled the sunset skies of summer in Santa Monica with the "Twilight" series featuring 534 bands playing multiple musical formats ranging from zydeco, blues, and rock to jazz, reggae and funk – plus much more.

While this year's "Twilight On The Pier" program has been canceled due to the coronavirus, a "Twilight" celebration has begun that includes:

- Week Two – August 26, Pacific Park will be sharing a comprehensive list of every band who ever played "Twilight."

Pacific Park will be announcing other programing and surprises during the retrospective. Updates and links to the content can be found at http://www.pacpark.com/twilight.

The beloved Santa Monica "Twilight" summer music series has changed its name three times over the past 35 years from "Twilight Dance Series" in 1985 to "Twilight Concert Series" in 2012 and today's billing of "Twilight on the Pier" in 2018.

While working on the essay A History of Twilight at the Santa Monica Pier historian James Harris said, "The 'Twilight' program has been a community treasure throughout the years with families and friends coming together for a few hours each week in the summertime under the stars near the surf and sand. There's a unique California quality to the shows that have traditionally begun during the pink skies at sunset."

"The summer concerts at the Santa Monica Pier are an important part of the Pier's history and evolution into the world-class entertainment destination that we are today," says Nathan Smithson, Director of Marketing and Business Development at Pacific Park on the Santa Monica Pier. "It's been a privilege to be a neighbor and partner on the Pier and often a sponsor throughout the years."

As the Santa Monica Pier celebrated its 100th anniversary in 2009 and Pacific Park recognized its 20-year mark in 2016, together they welcome more than 8 million visitors annually to enjoy the two-acre amusement park and the incredible views of the Pacific Ocean.