Life in Santa Monica Returns to Normal, Sort Of, as Coronavirus Pandemic Rules Ease a Little

You can get a haircut again, but you'll have to sit on the sidewalk while you do it. 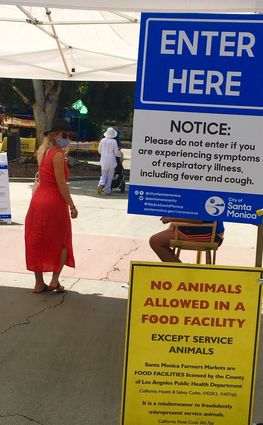 A woman looks behind her while entering the Farmers Market

Most Santa Monica residents are trying to obey Gov. Newson suggestions about interacting with people, wearing masks and flattening the curve, during this pandemic crisis.

One of his dictums was that beauty/barber shops were allowed to work if their services were outside. So the Santa Monica Beauty and Barber shop set out two chairs on Wilshire Blvd at 20th street and gave people haircuts. The beauty shop on Main Street and Hill has outdoor tables which do manicures.

Many Montana Ave restaurants have used sidewalks or a thin sliver of the street in front of their spaces to put up barriers - wood, concrete, bamboo. Some spaces had multi colored umbrellas, and were serving food al fresco. 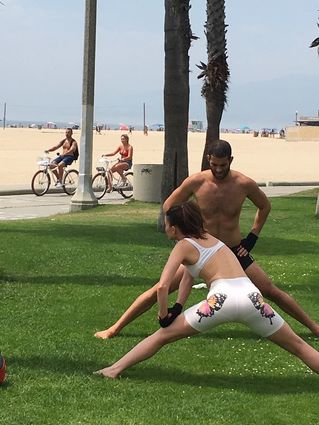 A couple exercising on the beach in Ocean Park

Sunday's farmer's market has strict rules, posted on the Main Street entrance about how its shoppers are to behave re touching products, entering without animals, and where it is permissible to eat. The number of shopper was few, the number of farmers selling about 1/3 of usual. The Victorian Hotel was serving lunch on the patio in front of the museum. Usually there are many children and adults frolicking in this garden space but not last Sunday.

The beach at the foot of Ocean Park had few bathers, though the bike path had many cyclists. Percy was doing a lot of business renting equipment. There were even a few runners and exercisers who braved a hot sunny day.

Science has told us one way to avoid getting the virus is to avoid large crowds. The shops on Main Street/ Montana Ave have clear signage limiting of number of people allowed in. Wearing masks was required but foot traffic was spare.

This is a critical time for all Californians but one has the sense most people, except the maskless ones, are following the governor's orders to prevent the spread of Covid 19.