City leaders threaten to Cut Power to Parties, as Los Angeles did, in a bid to stop the parties. 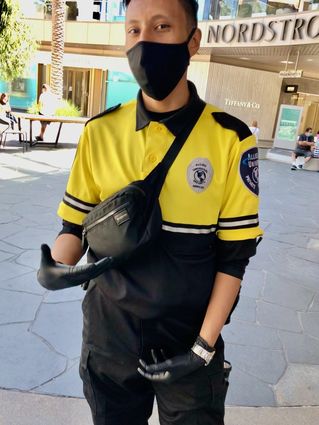 A private security guard explains the rules at Santa Monica place, which include a ban on large gatherings.

8/27/20: On Monday, the City of Santa Monica issued its 22nd Local Emergency Supplement, that is, yet another order restricting citizens' rights. This time, the city threatens to fine property owners for holding any gathering of over 20 people and to shut off their utilities. In addition, the violators could be charged with a misdemeanor. Fines would be $500 for a first violation, $750 for a second and $1,000 for a third violation committed within one year. Gatherings of any number of people not in the same household have long been banned in the County of Los Angeles. What is different about the city's emergency order is the addition of penalties for violation.

The city's threats are not very impressive. In fact, the only truly frightening aspect of this new regulation is the implication this (and other) emergency orders could still be in effect a year from now. The rest of it is hooey. The city attorney is clearly throwing emergency orders onto the government's website in an attempt to shut up the control-freak mask-scolds who think if only people 'did more' and 'cooperated,' it would stop the spread of a highly infectious virus.

A misdemeanor charge in 2020 California is less important than a parking ticket. You will not go to jail. You will probably never even have to go to trial. Of the over 400 people arrested for rioting in Santa Monica on May 31, only a handful were even charged. It is highly doubtful the host of a party of 21 people would see the inside of a jail - or even a courtroom.

As for shutting off utilities, good luck, Santa Monica. Los Angeles Mayor Eric Garcetti made a similar threat to his constituents after an infamous house party in Beverly Crest showed up on TV and turned into a gang shooting. But the threat from Lane Dilg, SM City Attorney is even more empty than his.

Residents here get their power from Southern California Edison. This is a private company, regulated by the California Public Utilities Commission. The City of Santa Monica has absolutely no authority to interfere in the relationship between SCE customers and the power utility. Same goes with natural gas. So that's off the table.

Santa Monica does, however, provide its residents with water. Sustainably. Expensively. Can they decide to shut off that water because they don't like what residents might be doing?

There are state laws that protect the rights of residents to water. California Water Code (Division 1, Section 106.3) "establishes that every human being has the right to safe, clean, affordable, and accessible water adequate for human consumption, cooking, and sanitary purposes." SB 998, enacted in 2018, reiterates this right and sets out a 60-day time span after delinquency of payment before a utility can shut off water. Notice must be given 7 business days prior to any such cut-off. There is no provision whatsoever for allowing a utility to shut off water because a customer has violated a misdemeanor local order. 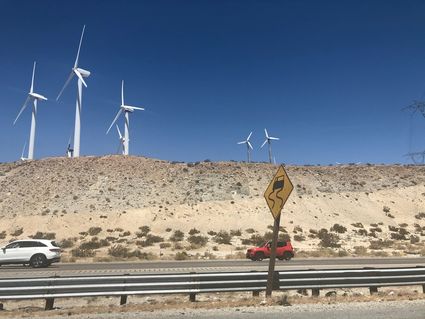 Wind generation near Palm Springs on the ten freeway

It is unlikely the city actually plans to try enforcing this order. So far, only three citations have been issued regarding the over-the-top order requiring citizens to wear masks outdoors. This was another regulation obviously put in place to placate hysterical mask scolds whose fear and persistence led city officials to institute orders that make no scientific sense.

Nevertheless, with her threat to cut water to noncomplying residents, Dilg reveals the ugliest possible side of government, when it asks for public trust, supplying promises of good faith, and then betrays that trust regarding essential services in the most arbitrary, totalitarian manner possible. She's not doing herself or the city any favors with this type of draconian decree.

I think the real virus is a dictatorship complex. It's astounding how these state and local officials just shred the Constitution in their grab for power, using the virus as an excuse. Apparently, they forgot that not only does our First Amendment guarantee freedom of speech and religion, it also includes freedom of assembly and free association. NO exceptions, and it says NOTHING about comprising those freedoms in the event of viruses, pandemics, executive orders, public health, the so-called general welfare or anything else. Those people don't deserve to be called Americans, and should be stripped of their citizenship. Yet, it's terrifying they're all in positions of power.