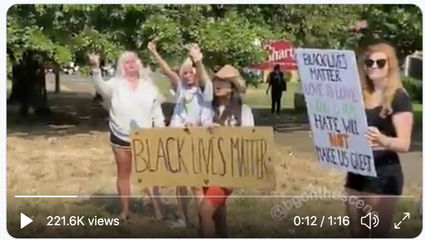 California could lose federal education funding if they persist in teaching an "antiracist" curriculum. Last week, Trump was alerted via segments on Fox News that workers at federal agencies were being forced to attend racial sensitivity training that resembled Soviet gulags, with white workers being forced to concede that "virtually all White people contribute to racism" and that it is racist to consider America the land of opportunity. The president directed Russ Vought, director of Management and Budget, to send a memo to all federal agencies prohibiting training that "teaches or suggests that either (1) that the United States is an inherently racist or evil country or (2) that any race or ethnicity is inherently racist or evil."

In addition to the memo, Trump tweeted that he was considering investigating the institution in public schools of curricula teaching the New York Times's "1619 Project" - and withholding federal funding from schools that insist on doing so. In the 1619 Project essays, Nikole Hannah-Jones reframed the inception of America as founded in and motivated by the enslavement of Africans. Hannah-Jones won a Pulitzer Prize for the essays. However, a number of prominent historians have taken exception to her reframing of events, saying it suggests "a displacement of historical understanding by ideology." Errors in her work "are matters of verifiable fact, which are the foundation of both honest scholarship and honest journalism."

The California State Legislature recently voted to require a semester-long "ethnic studies" course for high school graduation. The model curriculum for the course does not reference the 1619 project by name, but is clearly inspired and motivated by the same impetus. In the new course, students will examine "systems of oppression," including capitalism. Systemic racism it taken as a given in contemporary United States. White-dominated culture is presumed to be responsible for all forms of racism and bigotry.

The Santa Monica-Malibu Unified School District has already adopted embedding 20 "social justice standards" into the K-12 curriculum, lifted from a Southern Poverty Law Center website, Teaching Tolerance. The website is unabashedly steeped in Ibram Kendi's "antiracist" philosophy, which assumes that any disparity in outcome between races - such as in test scores or salaries - must necessarily be the result of systemic racism (and nothing else). Kendi's book, also used as a resource for the SMMUSD curriculum, states that "capitalism is essentially racist" and "racism is essentially capitalist." To ensure the country become antiracist, Kendi suggests a Stasi-like Department of Anti-racism that would monitor all government agencies for racial inequities or the expression of racist ideas. Keep in mind that Kendi considers any disparity between races (that result in blacks on the lower end, that is) as racist. 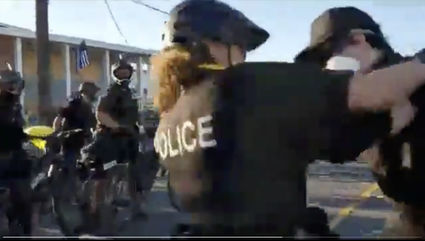 Police struggle with demonstrators in Portland, OR 9/7/2020

States can be highly sensitive to the withholding or granting of federal education funds. In 2009, President Obama and Education Secretary Arne Duncan created the Race to the Top initiative. $4.3 billion in federal funds were promised to states that pledged to reform their educational standards in certain areas. Out of 500 possible points, 40 were awarded to states that adopted the Common Core standards. In addition, the feds promised $330 million for developing assessments to measure the Common Core standards (and none for any other standards). 48 states ended up adopting Common Core.

Should California persist in indoctrinating its children in the foundational evil of their country and its founding principles, they could lose almost 10 percent of their budget if the federal government follows through on its threat. When teachers are laid off, programs are cut, and class size balloons, remember to ask who and what is responsible for the budget shortfall.