Authorities deny that the suspect is wanted for any connection to Saturday's shooting of 2 deputies at the Compton transit station. 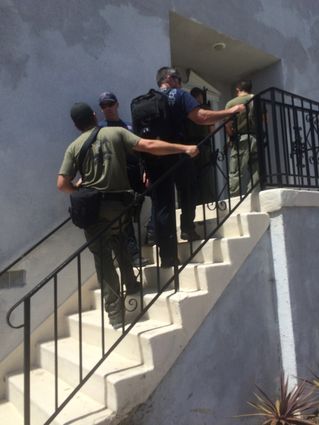 Update, 9:15 pm PST: Police continue to search the Lynwood neighborhood where a police chase ended this afternoon. Two blocks are taped off and at least 40 officers are engaged in the house to house search at this time.

A man sought by LA County Sheriffs Deputies in a search of a residential neighborhood in Lynwood is rumored to be suspected of an unprovoked attack on 2 police officers at the Compton transit station Saturday afternoon. The LASD's Special Weapons and Tactics Team or SWAT has arrived, reports NBC Los Angeles.

The Sheriffs Dept officially denies that this suspect is connected to yesterdays shooting. But NBC stands by the story, citing multiple sources.

"Multiple law enforcement sources say detectives in Lynwood are increasingly confident that a suspected carjacker, who led LA County Sheriff's Department deputies on a high speed chase Tuesday, is connected with last weekend's attack on two transit patrol deputies who were shot while seated in a patrol car in Compton," NBCLA.COM reported Tuesday at 4 pm PST.

"The person being chased was driving a light blue Toyota coupe that crashed in the 3100 block of Carlin Avenue in Lynwood, and the sources said the driver ran from the car into a home or condo nearby.

"A city block of homes nearby was being evacuated as members of the LA County Sheriff's Department's Special Enforcement Bureau, its SWAT team, prepared to search homes, apartments, buildings and yards."

Sheriff Alex Villanueva told NBC4's Angie Crouch in an interview Tuesday that the search was unrelated to the attack on the deputies in Compton, and he repeated that message in other media interviews throughout the day.

A gunman brazenly shot two Los Angeles County sheriff's deputies as they sat in a patrol SUV at a Compton rail station on Saturday. A reward for information leading to the suspect was set at $200,000.

The deputies, members of the Transit Services Bureau, remained hospitalized in critical condition. Sheriff Alex Villanueva was hopeful about their prognosis, saying they were spared any injury to a vital organ that would have jeopardized their life immediately.

He added that the deputies -- described only as a 24-year-old man and a 31-year-old mother of a 6-year-old boy -- have a long road to recovery. Villanueva said Saturday both deputies were sworn in just 14 months ago.

A GoFundMe page set up for the two deputies raised nearly $280,000 as of this morning as a reward for information leading to the arrest and conviction of the suspect increased to $200,000. As of 1 a.m., more than 3,900 people had donated $279,635 toward the page's goal of $400,000. The page, which was started by sheriff's detective Keegan McInnis, can be found online.