There has been talk about ending the filibuster or packing the Court. Are you willing to tell the American people tonight how you stand? 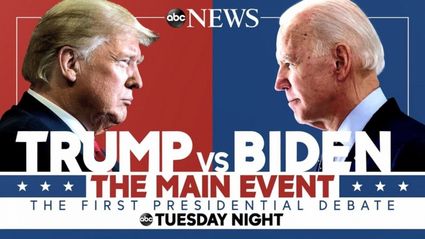 Moderator Christ Wallace: Good evening from the Case Western Reserve University, for the first debate between Donald Trump and Joe Biden. 2 minute answer to each question, then open discussion. I can assure you, no one has the answers in advance. The candidates will not change hands, the audience has promised to remain silent.

We welcome the Republican and Decmocratic nominees. "How you doing man?" asks Biden.

Gentlemen, our first subject is the Supreme Court. Pres. T, you nominated Amy Coney Barrett saying your obligation and the senate's is clear. JB, you have called this consideration by the Senate an abuse of power."

B: The American people have a right to have a say, by voting for Sen and Pres. The thing that should happen is we should wait. That;'s the only way the people have a say. Now the pres. has made it clear he wants to get rid of the affordable care act,

(Biden stumbling at the outset already a bit.-- Ben Shapiro in a tweet)

T: You didn't want me to ban China, which was heavily infected.

M: We're going to talk about Covid in the next segment.

M: We'll come back to Roe v. Wade. 18 state attys general are seeking to overturn Obamacare. Over the last 4 years you have promised to replace it but you have never come up with a comprehensive plan to replace Obama Care. (M and T interrupt each other)

T: I guess I'm debating you not him, but ok. No president has the courage to go against big pharma but me. B laughs. I'm getting it for so cheap, we will allow people to go to otbher countries for drugs.

The fact of the matter is I beat Bernie Sanders. T: You're lucky Pocahontas left. B: I'm not here to call out his lies. T: No you're a liar. M: can you let him finish, sir?

B:He does not have a plan. And the fact is this man doesn't know what he's talking about.

M: There has been talk about ending the filibuster or packing the Court. Are you willing to tell the American people tonight how you stand?

B: The American people will know how I feel. The thing is people should go out and vote

M: What is your plan for Coronavirus?

B: The president has no plan. He did not even ask Pres. Xi of China to evaluate how dangerous Coronavirus is. I laid out again in July what we should be doing. We should be providing all the funds the House has passed, to allow people. You should get out of your bunker, and fund what needs to be done now to save lives.

T: If we had listened to you, millions of people would have died. It was China's fault, it should never have happened. You don't know how many people died in China, INdia, Russia. They don't relerase numbers. You wouldn's have closed it for another month. Pres. Trump saved thousands of lives, Fauci said that, you wouldn't have made ventilators.

I'll tell you joe, you could never have done their job that we did. You were a disaster on swine flu.

B: He shut down the economy, this is his economy. How many of you have lost a mom or a dad. His own CDC director says we could lose another 200k people by the end of the year. On vaccines, we don't trust him at all, what we should trust is the scientists.

B: He knew about this in February and he didn't tell you. He's a liar.

T: You said you went to Delaware State and you didn't. You were the last in your class, so don't use the word smart, Joe.