Push poll seeks to persuade Santa Monica voters to like the Plaza Who could have paid for it? We wonder...

The Plaza Will Be 2 City Blocks of Downtown Santa Monica; 106,800 square feet of office space in a massive, 11-story, slightly stepped-back building 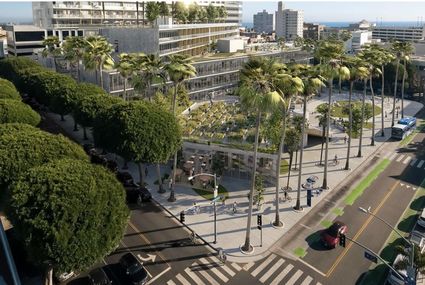 Artist concept of The Plaza project. A telephone push poll seeks to persuade voters to like The Plaza. Who paid for it?

On Tuesday, I answered a call that turned out to be a push poll in favor of the Plaza project at 4th and Arizona. The Plaza will take over two city blocks in downtown Santa Monica with 106,800 square feet of office space in a massive, 11-story, slightly stepped-back building. The height will be 129 feet.

The "questions" in the poll, conducted by Zogby, asked the respondent to consider, one by one, the numerous benefits of the huge development. I was asked to admit the virtue of the union jobs, prioritized for residents, the construction would create and who would work at the 240-room luxury hotel. (I replied I doubted many Santa Monica residents were union construction or hotel workers.) I was taught the development would bring in a revenue stream of a whopping $8 million per year. I laughed. The city would never see that amount of money - or at least the public would not. Even if we did, it would not be enough to compensate for the increased density, increased traffic, increased pollution, increased need for police and fire protection and so on and so on that the project would cost the public. 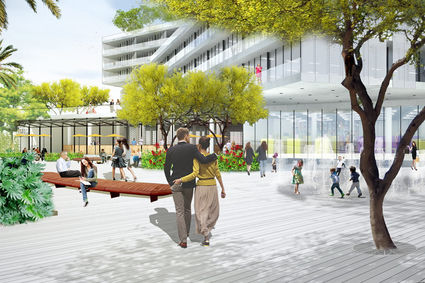 Artist concept of The Plaza project. A telephone push poll seeks to persuade voters to like The Plaza. Who paid for it?

Over and over, after learning of yet one more stupendous "public benefit," I was asked whether I strongly or somewhat opposed or approved of the Plaza project. Baffled, I finally asked the surveyor why anyone cared. The Plaza had already been approved by the City Council. He had no answer for me. The workers who call out are not told who pays for the survey.

However, a juicy clue was provided near the end of the survey. I was asked if I intended to vote for the incumbents on the city council. As I write this, I am still laughing. Having approved this white elephant that they feared nobody really wanted, the council NOW wants to convince their constituents the eyesore is only for their own good? A month before the vote, the council members up for reelection are dangling tempting bait in the water, hoping Santa Monica voters will take it and forgive them for foisting a private development overwhelmingly benefiting private individuals on a public whose land was stolen from them for this purpose.

Well, good luck to them.