A local resident finds between 20-50 addressed, stamped, unopened ballots in the trash, and gives them to police. 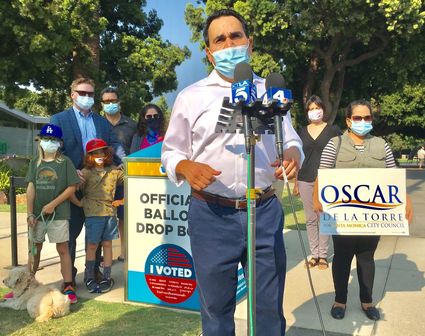 Oscar de la Torre, the often outspoken candidate for Santa Monica City Council alleges that dozens of ballots were found in a trash can. He has called a press conference for 3 pm Wednesday. We sent our most senior staff photographer, Mary Leipziger, to attend.

"A young man in a chartreuse jacket said came home from work at 4 AM Thursday October 8. (He would not give me his name, nor some photos he says he has). He is a local resident, and found his neighbors congregating in an alley between 20th and 21th on Virginia Ave," Mrs. Leipziger writes.

"Apparently someone, not him, found between 20-50 addressed, stamped, unopened ballots. One story is that they were sent to the SM police, that department reports the ballots were sent returned to the post office."

"6 adults, two children and a dog came to the press conference in Virginia Park to hear what happened. It was held in front of the official drop box for ballots. All were wearing masks. Oscar de la Torre is running for SM city council, and a woman came to this meeting holding a sign re his potential election. He spoke briefly about protecting our democracy," Mrs. Leipziger concluded.

"Residents, Elected Officials and Candidates Call for an Investigation and Urge Voters to Drop Off Completed Ballots to Official Voting Centers in Response to Finding Dozens of Trashed Mail-In Ballots 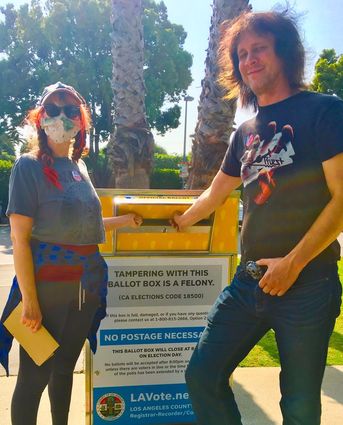 Santa Monica, Ca. – Residents in Santa Monica were alarmed at finding dozens of mail-in ballots in a trash bin. Media outlets reported the incident this morning after a man discovered the thrown away ballots. It was also discovered that along with the ballots were multiple mailers for School Board Member Oscar de la Torre who is challenging four incumbents for a seat on the Santa Monica City Council. This comes after a postal worker was seen throwing away dozens of ballots in Glendale last month. Community leaders, elected officials, candidates and residents are organizing a press conference this Friday at 3pm at Virginia Ave. Park (2200 Virginia Ave.) in Santa Monica in front of the Thelma Terry Center, which is one of three Vote Centers in the City of Santa Monica and adjacent to the site where the trashed ballots were discovered."