Following the disaster, the U.S. Army Corps of Engineers and the County of Los Angeles built a flood control system of catch basins and concrete storm drains, designed to prevent a repeat of the 1934 disaster 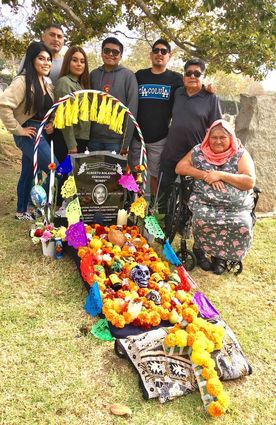 Alberto Hernandez at Woodlawn Cemetery this past Dia de los Muertos. He died about a year ago and his parents, niece,nephew, brother and sister in law were there to commemorate his death.

Woodlawn Cemetery is owned and operated by the City of Santa Monica. Anyone who drives by the neighborhood of 14th and Pico can see that it's a cemetery. There is a long list of celebrities who's eternal resting place is there.

Among the forgotten people famous in their day who are buried there, are "Our Gang" acting twins, Winston and Weston Doty. Tragically, they died in a flood, at only 19 years of age. They were college students at USC when they died in a New Years Eve flood at the end of 1933.

Winston and Weston – originally Winston and Wilson, though the latter was later changed after the two began appearing in silent films – were born in Malta, Ohio, sons of Lawrence "Jack" and Olive Doty. Their father was a stage and radio actor who had separated from his wife when the boys were fairly young.

The brothers lived with their mother in Chicago, Los Angeles, and later in Venice, says Wikipedia. https://en.wikipedia.org/wiki/Winston_and_Weston_Doty

Between 1922 and 1924 Winston and Weston Doty appeared in a handful of silent film shorts, among them "Our Gang," 1922 with Anna Mae Bilson and Jackie Condon, One Terrible Day, and one full-length feature, Peter Pan (1924). In 1930 Olive Doty was employed in Los Angeles as an investment manager while her boys clerked at a local grocery store after school hours. Later the twins enrolled together at the University of Southern California where they became popular members of the USC cheerleading squad. 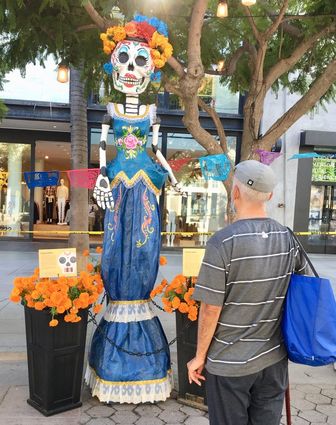 Dia de los Muertos on at the Third Street Promenade in Santa Monica.

On the night of December 31, 1933, the brothers attended a party at a friend's house in Montrose, California, with their dates, Mary Janet Cox of Venice and Gladys Isabel Fisher of Santa Monica. At midnight they called their mother to wish her a Happy New Year, and, upon beginning to drive home, not long afterwards perished when a deluge of water caused by heavy rains swept through the neighborhood, killing some forty people. Of the four, the only one to survive was Weston's date, Mary Janet Cox.

Following the disaster, the U.S. Army Corps of Engineers and the County of Los Angeles built a flood control system of catch basins and concrete storm drains, designed to prevent a repeat of the 1934 disaster.

Winston and Weston were interred together at the Woodlawn Memorial Cemetery. In April of the following year, Jack Doty died alone in his hotel room in Chicago at the age of forty-two.