Neighbors forcefully opposed the project, which they said would generate noise, traffic, and crime 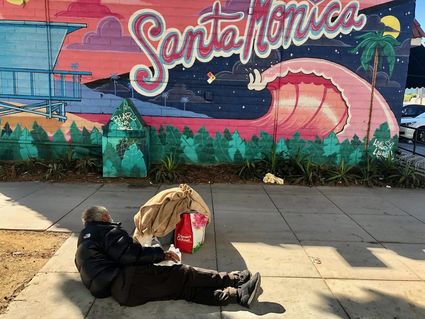 Outside the 7-Eleven at Wilshire and 6th Street, a typical view complete with vagrant

The Santa Monica Planning Commission approved a permit for 7-Eleven convenience store to move into the former Bank of America building on Wilshire at Berkeley. The applicant requested the store be allowed to operate 24 hours a day but did not request an alcoholic beverage license.

Neighbors forcefully opposed the project, which they said would generate noise, traffic, and crime. Concerns were circulated on social media claiming FBI statistics show 24-hour convenience stores are magnets for crime. A 60-spot parking lot behind the building was also felt to be a potential source of loitering by vagrants. Whatever the data, most people familiar with 7-Eleven convenience stores know the type of person who like to frequent - and sit outside - such places. The 7-Eleven at Wilshire and 6th is a neighborhood eyesore and attracts unsavory individuals, creating an unsafe environment.

Tricia Crane, chair of Santa Monica Northeast Neighbors, wrote that 200 emails were sent to the Planning Commission opposing the project and many residents "spoke forcefully during Public Comment about their concerns over safety and noise and traffic the 7-Eleven would generate."

At the very least, neighbors requested the hours of the convenience market be reduced to match those of nearby businesses, such as Bristol Farms, which is open from 6 am to 11 pm. 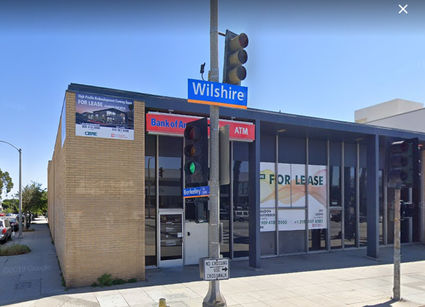 Abandoned Bank of America building on Wilshire and Berkeley, proposed site of 7-11

However, the Planning Commission felt traffic would not be greatly impacted by the market, and noise could be reduced by a proposed 8 foot wall. They declined to reduce the 7-Eleven's business hours as requested, but did reduce them to 5 am to 12 am.

The only commissioner to vote against the permit for the 7-Eleven was city council candidate Mario Fonda-Bonardi. He'd argued for the reduced hours as proposed by residents and, after that idea was rejected, voted to oppose the project altogether.

Appeals of the Commission's decision may be made to the City Council for a limited time period.

The seven Planning Commissioners serve 4-year terms after appointment by the City Council. They are not elected. Their stated mission is to "envision Santa Monica as a city of well-being, sustainability, and equity."

Opposition appeal to ‪7/11‬ on Berkeley & Wilshire was filed with the city hall on Tuesday 11/17/2020 (2 days before deadline.)   The 400 pages document was consisted of over 800 signed petitions and opposing letters by residents & neighbors as an appeal to Planning Commission decision on 11/4 meeting. The appeal must be reviewed by the city staff & will be presented to City Council in early 2021.   And--7/11 also appealed to the City -they want to be open ‪24/7‬.  So you know what we are dealing with.   Thank you to all of you who supported & participated in this appeal. In addition to NEN, Mid-City neighbors joined in this appeal. We still need more signed petitions and we can submit them as an amendment to our appeal. Sign our petition to appeal 7-11, https://forms.gle/zkz8iBziKrDtTKQP7   We don’t want and don’t need ‪7/11‬ in our neighborhoods!    Jaleh, Annette, Marc, Charles

Having a 7/11 in that location would be an outrage. The recent looting and riots made it clear that this location had no security on premises and the residents were left to fend for themselves while the CVS was looted of narcotics, BevMo had liquor stolen and the adjacent Big5 had guns stolen. The Bristol Farms has woefully inadequate security with no one at all patrolling the parking lot. The SM police department has no presence at all in the area and did nothing when called during the looting. The 7/11 will be a target for crime and we the citizens will have to pay. This must be STOPPED. The only reason to approve this type of business is to make money for the city officials and does not serve the community. There is no room for more delivery trucks in this already over-congested intersection. It is already a blatant traffic hazard making it dangerous for children walking in the area and people pulling out their cars from their drive ways. This will surely decrease property values.

Thank you SM Observer for your attention to safety of the neighborhoods in the Santa Monica! The corporate 7-11 is planning to take over our small private family stores in Santa Monica! We residents fight against them as hard as possible!

One only needs to look at any 7/11 location in SM (Lincoln Blvd) or West LA (SM Blvd, Wilshire Blvd) to see that these stores attract unsavory characters who just sit outside at all hours of the day. I have lived in Santa Monica for close to 30 years and strongly oppose the approval of this store. It will not serve the local residents. There are plenty of pharmacies in the area that provide essentials at odd hours.

I am very concerned about a 7/11 coming to my neighborhood and would prefer it not go in at all. I understand the owner may not have very many options right now due to COVID so please consider a short lease with restricted hours. 7/11s never look appealing either inside or outside so restricting outside signage and setting rules regarding cleanliness of the outside sidewalks and parking lot would be greatly appreciated. They need to have working outdoor security cameras and pay for an additional security service to drive by regularly. Up kept landscaping would also help make the store be more of a welcome site vs an eyesore. Thank you for considering. I do hope the owner can find other tenants that will benefit the people who live here.

@: FBI statistics show 24-hour convenience stores are magnets for crime. So true. Studies have also shown when Mozart is played as their music, crime around the stores plummets. Any commissioner who 'believes' that an 8-foot wall will mitigate sound sufficiently to restore the peaceful character of this residential neighborhood is smoking something s/he can't buy legally. But our City has long given deference to noise over quality of life. The Resident Satisfaction Survey was mostly a push-poll designed to generate more cover than light.

Excellent article. Important. Terrific journalism. The observer and its staff of reporters is one of the few organs that addresses the important issues of the city with an unflinching professional eye. We need it here in SM more than ever. Thank you. Marc Abraham

We do not want a 7-11 in our neighborhood. Nor do we need one. There are plenty of options to grab a fast bite - Ralph’s, Bristol Farms, Sainsbury Market, Erehwon. There is a CVS a block away. Many of us have young children and teens in the homes nearby and they like to walk to Bristol Farms. The 7-11 there will attract vagrants and make us feel unsafe.

Thank you! Please help keep our community safe We are now in the appeal process to the City Council and need all voices to be heard. Please join our appeal by signing our petition to appeal 7-11 https://forms.gle/zkz8iBziKrDtTKQP7 , and sharing this article with our community.