"Hundreds of thousands of votes were created and attributed to Biden, at the click of a mouse, in states Biden needed to win," she says

Sidney Powell: State officials who bought the questionable software were given kickbacks to use it. And it's not just Dominion; also other companies

Speaking on Fox News to Maria Bartiromo Sunday 11/15, Sidney Powell is not terribly specific. She says Dominion software is completely unreliable, that it's been used by Hugo Chavez and China to steal elections. She claims that hundreds of thousands of votes were created and attributed to Biden, at the click of a mouse, in states Biden needed to win.

Powell said that State officials who bought the questionable software were given kickbacks to use it. And it's not just Dominion involved, but also other software companies, she adds.

"(CIA Chief) Gina Haskell should be fired immediately," Powell said. Before the election, "the CIA and the FBI received multiple reports of wrongdoing and failures with respect to this software. Their own reports say why no honest person should use this software. The people who bought the Dominion system for sure knew just what they were getting. And we are going to show the public exactly how rotten the entire state is."

"They can remote access anything, they can shift votes from Germany, they can do it remotely. When Biden said he had the largest voter fraud organization in history, he was right. They can make the machines read and document only the Biden votes, all of a sudden 100's of thousands of votes for Biden not trump, in a 2:1 ratio," Powell said. 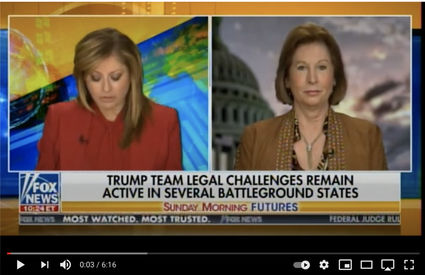 Sidney Powell: CIA May have Used Dominion for Its Own Benefit - Haspel Should be Fired Immediately

She added what Trump supporters know intuitively: Trump conducted huge rallies, there was no such excitement for Biden. That Republicans did well elsewhere, and Trump did well in the red states. But in 4 or 5 swing states, Powell says suddenly the tide turned and Trump lost when the Dominion software activated to manipulate the results to add hundreds of thousands of votes for Biden.

"Rigged election. We will win!" tweeted President Trump at 10 am EST. "He only won in the eyes of the FAKE NEWS MEDIA. I concede NOTHING! We have a long way to go. This was a RIGGED ELECTION!"

"This claim about an ongoing election is disputed," added the Twitter algorithm.