The pandemic and lockdowns have quietly created another problem: Food Insecurity 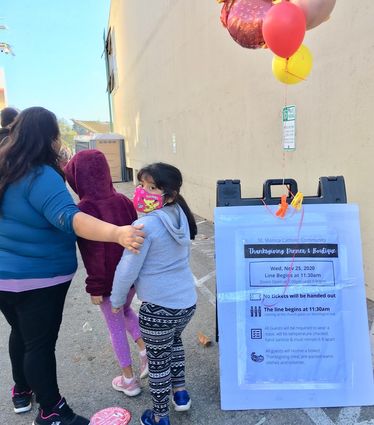 A family at St. Monica's Catholic Church waited to receive gifts of food, toiletries and clothing

St Monica's Catholic Church couldn't provide its annual Thanksgiving dinner for those in need, due to the worldwide Coronavirus pandemic and the Los Angeles County Health shutdown.

So instead, Wednesday on the grounds of St Monica's High School, guests in need were given a boxed Thanksgiving dinner, warm clothes and toiletries. Their temperatures were taken, hand sanitizers were supplied and guests were requested to stand 6' apart.

The event took place on Wednesday afternoon at St. Monica's on Lincoln and California. A line of people went round the block. There were mother's with baby strollers, and older people.

Not everyone in line was visibly homeless. In fact, only a minority of them were homeless people.

"Nearly 1 in 4 residents have suffered from food insecurity since the start of the pandemic," says LA County. It offers a web portal to help with those who are uncertain how they will pay for their next meal. 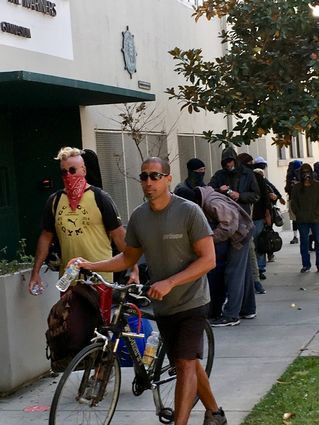 A bicyclist walks by a line winding around the block at St. Monica's, where guests received free food, toiletries and clothing.

Local news stations are reporting that with the lockdowns, restaurants and other businesses closing, and Congress failing since September to pass some sort of relief bill, that many more families are suffering food insecurity. By some estimates, as many as 4 million in LA County, 40% of the population, now suffers from food insecurity.

Reportedly this group includes college graduates and business owners; people who never imagined they would have needed help. 2020 has been full of surprises, many of them not pleasant. But we can all hope for better times next year, with a vaccine on the way this Spring.

A Jewish prayer says “Once I was young and now I’m old, but never have I seen a righteous man without food, nor his children in the streets begging for bread.”

The only plausible explanation is that the psalmist opened his heart and his pantry to the poor, as people of good faith continue to do today.