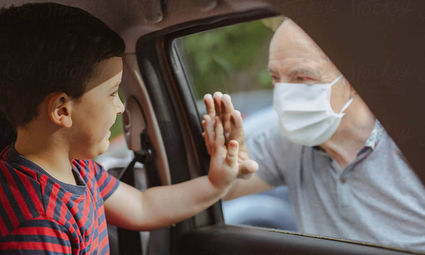 Grandparents are told to stay away from their families this Thanksgiving

The two supervisors' motion followed an announcement on Sunday, November 22, by the county's Public Health Department that they were ordering the closure of all outdoor dining, after previously reducing such dining to 50 percent capacity on Friday, November 20. The health department had warned that if cases rose to a 5-day average of 4,000 or hospitalizations reached more than 1,750 per day, they would take this action. On Sunday, the five-day average for cases became 4,097. The case number is apparently what tipped the scales because the hospitalizations on that day were only 1,401 people.

The health department, in their statement on Sunday, repeated their warning of yet further action they will take should the five-day average of cases rise about 4,500 or hospitalizations go over 2,000 per day. In such case, they will issue a new Safer at Home Order, closing all but essential businesses.

Even before such order might take effect and close all retail, Public Health's Sunday statement "reminds everyone to stay home as much as possible for the next two to three weeks to change the trajectory of surging cases and save lives."

"As we modify our Thanksgiving holiday celebrations, we are reminded of the many families who will miss their loved ones who have passed away from COVID-19. We send wishes for healing and peace," added Barbara Ferrer, PhD, MPH, MEd, Director of Public Health.

In separate statements, Supervisors Barger and Hahn disputed the necessity or effectiveness of closing the restaurants outdoor dining capability. "There is no data to support closing restaurants," wrote Barger in a statement on Facebook. "This action was arbitrary and only further encourages private gatherings, which is where the virus is actually spreading." In her statement, Hahn agreed. " I don't think we have the data to prove that outdoor dining is driving the recent surge in cases, nor do we have the data to assure us that this action will turn our case numbers around. I am also very worried that it will drive more people to indoor gathering." 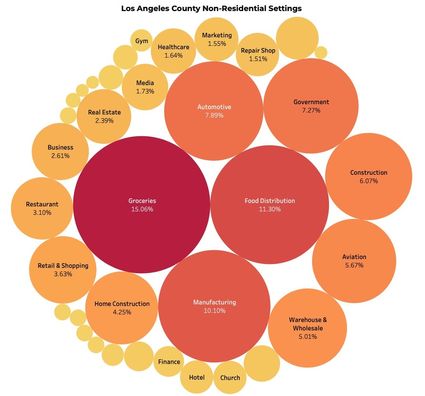 Others on social media also disputed the evidence that restaurants are a major source of COVID transmission. Bill Melugin of FOXLA retweeted a graphic constructed by Justin Hart, based on LA County Public Health data, that showed restaurants responsible for only 3.1 percent of "outbreak" locations. Of these, most of the restaurants responsible were fast-food chains with no outdoor dining.

Since the two county supervisors were unconvinced of a scientific reason to close the restaurants, they decried what they considered the unjust economic burden on this sector. "It would be one thing if we had a new stimulus from the Federal government so that we could help the restaurants and the people losing their paychecks-but we don't," wrote Hahn. "We asked businesses to invest substantial resources to ensure safety, only to force them to close. Small businesses cannot withstand these constant changes and deserve better," wrote Barger.