The Silver Monolith that appeared suddenly in the Utah desert, disappeared just as mysteriously sometime before sunrise Sunday. Reportedly, 4 Earthlings quickly dismantled the monument, laying it flat first then dividing it into sections.

Witnesses didn't want to risk their safety by taking cellphone photos as the men jumped out of an SUV. There are a few blurry photos.

""We have received credible reports that the illegally installed structure, referred to as the "monolith" has been removed by an unknown party. The BLM did not remove the structure which is considered private property..." More: https://bit.ly/36gC2tA" tweeted the US Bureau of Land Management.

The monolith caused quite a stir when a glint of the thing appeared to a helicopter. It towered ten feet above the desert floor, appeared to be embedded several feet into the sand. It was by some colorful red cliffs, though the BLM did not reveal its exact location for fear of vandalism.

Google Earth photos show that the tower was installed around the end of 2016. 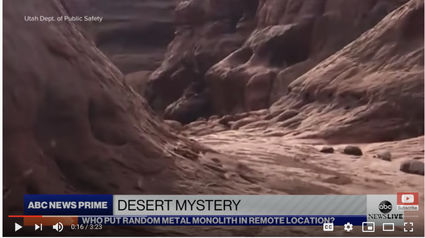 No one knows where it came from or where it went. It was three sided and silver in color, whereas the monoliths in 2001 A Space Odyssey, are black in color. In Arthur C. Clarke's Space Odyssey, Monoliths are machines built by an unseen extraterrestrial species. https://en.wikipedia.org/wiki/Monolith_(Space_Odyssey)

In the series of novels (and the films based on these), three Monoliths are discovered in the Solar System by hominids and humans. The response of the characters to their discovery drives the plot of the series. It also influences the fictional history of the series, particularly by encouraging humankind to progress with technological development and space travel.

The first Monolith appears at the beginning of the story, set in prehistoric times. It is discovered by a group of hominids and somehow triggers a considerable shift in evolution, starting with the ability to use tools and weaponry. It is later revealed that thousands of other monoliths exist elsewhere in the Solar System.

Has Stan ever met a conspiracy theory he's doubted? I don't think so. Weak minds are easily led.