"Dr." Barbara Ferrer gets called to account for closing restaurants right before Thanksgiving even as daily deaths remain in the low two-digits county-wide 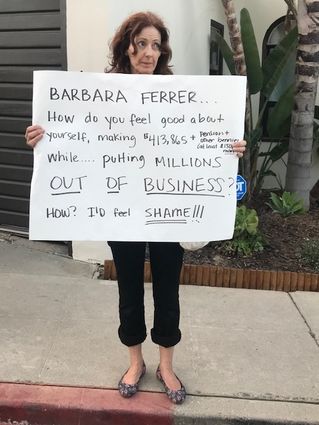 "Barbara Ferrer: How do you feel about yourself making $413,865 a year, while putting millions out of business? I'd feel shame," writes one protestor of Dr. Ferrer's lockdown orders

About 75 protestors marched up the hilly roads above Dodger Stadium on Sunday to protest outside the home of Barbara Ferrer, PhD, MPH, MEd, Director of Public Health. Ferrer has been the orchestrator of the various lockdown orders beginning in March. An expert in social justice and health equity, Dr. Ferrer is now referred to on talk radio as "doctor non-doctor" or "not-a-doctor" Ferrer. She makes almost half a million dollars a year in salary and benefits and has no medical degree.

The protest concerned Ferrer's latest health orders, closing restaurant outdoor dining effective November 25 and sharply reducing the capacity of retail effective November 30. For some reason, the orders closed outdoor playgrounds altogether. Children have been found to be the least at risk if contracting COVID-19. Meanwhile, the outdoor dining for restaurants was shut down after many had invested in construction of outdoor spaces and heaters, attempting to comply with previous outdoor-only dining rules.

According to an eyewitness, the protestors came from all walks of life, ages, and races. Some had been pushed out of work by the lockdown orders, with one black man having lost three jobs because of them. 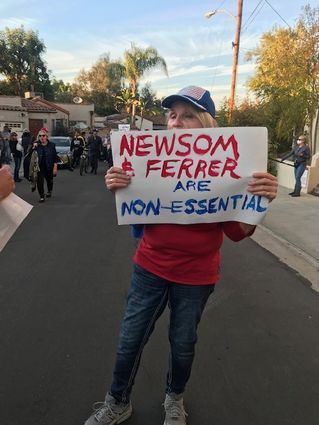 "Newsom & Ferrer are non essential," writes one protestor. Government officials have been making life harder rather than better for many, and there is a lot of anger.

About 10 Los Angeles police officers monitored the protest and relations were congenial between them and the protestors, even when the police eventually blocked off Ferrer's street and would not allow them to march in front of Ferrer's posh penthouse condominium. According to the eyewitness, the view from Ferrer's home is "to die for."

Few of the protestors wore masks, emphasizing their disdain for the health orders that have emanated from the state and county health departments ever since COVID-19 grew widespread in March. The highly public revelations of top government officials - House Speaker Nancy Pelosi and California Governor Gavin Newsom among others - going without masks and abrogating health orders has made a mockery of the restrictions imposed over the past eight months by our leaders.

But it was the restriction against being able to make a living that brought the protestors to the scenic view outside Ferrer's condominium. "The government workers are still employed and being paid as the rest of us are left to fend for ourselves," said one protestor.

And now 2 years later she is trying to start the BS up again. LA USC doctors say nobody in the ICU being treated for covid and only 10% of the patients that test positive now need any treatment at all...

Calling her names like lockdown queen says more about you than it does about her. Trump's bullies are pathetic. Whatever happened to the golden rule you so called Christian conservatives?