The purpose of advertising is to break through the clutter and get noticed. This art certainly does that; but is it funny, inspiring or insulting? 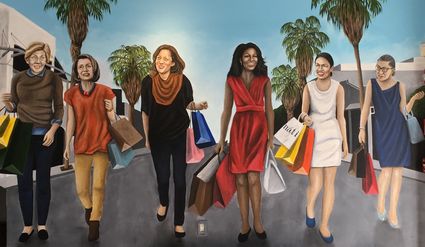 The seem to be close friends as they walk down Abbot Kinney in Venice, swinging shopping bags. The smiling women are wearing sheaths and blouson tops rather than pantsuits. AOC holds a shopping bag from Nati, where the mural is located. If you haven't seen it, it's awesome!

I think the message is that we're all the same, and that even the nation's most powerful women want to wear dynamite clothes.

After someone at Buzzfeed tweeted the mural by @CZJR, disparaging it, thousands appeared to photograph it. . "This mural inside an LA boutique is the most cursed thing ever made," wrote Rachel Zarrell, a creative director at Buzzfeed.

I think it's awesome art, and so do hundreds of people who have come to photograph it since. Some on the left though find it demeaning.

"Who in America today really would enjoy an experience on Abbot Kinney just shopping and having fun?" Ron Brawer, one of two owners, told LAIST.COM. "I felt those women really deserved it."

Brawer was surprised by the response to the mural, which he claims has been overwhelmingly positive; despite the fact that the female pols are neither wearing masks, nor socially distancing. 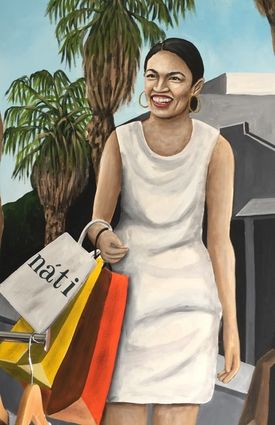 Brawer believes it's mostly Republicans who complain, since only Democrat women are depicted. I doubt that this is the case, since Cancel Culture comes from the Left, and Republicans are more inclined to laugh stuff off than Dems are. But then, that's just like my opinion, man.

"It's not easy to find a right-wing Republican woman who I feel deserves to be on the wall," Brawer said. "Susan Collins, Ivanka Trump - I mean, they just don't represent who we are."

Brawer notes that the piece is perfect for the current divisive national mood, with America divided over the response to the pandemic and the 2020 national election.

"Who in America today really would enjoy an experience on Abbot Kinney just shopping and having fun?" Brawer said. "I felt those women really deserved it."

Like art, the purpose of advertising is to break through the clutter and get noticed. In a political age, this mural certainly does that, and more.