Annex to the City Hall is supposed to save rent elsewhere but at a cost. $76.7 million

December 9 This week Santa Monica officials got exactly what they wanted when they approved a $76.7 million dollar City Hall annex in 2017 - at a whopping cost of $1,528 per square foot. They won an award. Specifically, they won an award for being so gosh-darn sustainable and environmentally conscientious.

The U.S. Green Building Council-Los Angeles awarded Santa Monica's City Hall annex design their Project of the Year award in the Un-Built Category. (Unbuilt? This project was supposed to open its doors on Earth Day (April 22) of 2020. What happened?) The annex was awarded because of its "cutting-edge criteria" of constructing a building with "goals for carbon neutrality before 2050, water self-sufficiency by 2023, and zero waste by 2030."

We are all for creating buildings that waste less and help the environment. We just think there's a better way to go about that than to spend $1500 a square foot (10 times what a normal building would cost) to construct a building that will be obsolete in about 5 years, when better technology that can do the same cool things for less money, will undoubtedly be available.

If something costs too much, it usually means it's a bad idea to do it. Money is a great indicator of reasonableness. If Santa Monica truly wanted to be sustainable - rather than simply receive awards and acknowledgement of how virtuous they are - then they would have used a simpler plan that would have allowed flexibility to add great new technology when it became available...at a reasonable price.

Instead, they pulled out all the stops to reach science-fiction level operations. Supposedly, the building will not only supply its own energy, but also contribute energy to the grid. It will capture rainwater and treat it for drinking. In fact, it will be the first building in California to do so. But the piece de resistance is its sewer system - or lack thereof. Your Santa Monica City Hall annex is going to have composting toilets. It will have the enviable distinction of becoming the first public building IN THE ENTIRE COUNTRY to do so. (Uh, maybe because other cities were understandably revolted at the idea of keeping human waste in the building?) 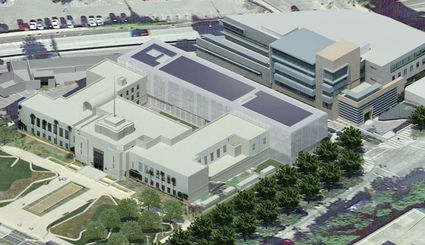 Santa Monica will be awarded their highly expensive prize at a virtual awards ceremony tonight at the 16th annual Green Gala. They only spent $76.7 million to get it.

We wonder when we're going to get our building that is going to pay for itself (I'm laughing) and last 150 years (also laughable).

While $1500 sq.ft. is ridiculously high, it is not anywhere near 10x the cost of building a commercial building. It is probably 4-5x and exaggerating like this undermines the reporter's credibility.