George Gascon of San Francisco Wants to be Your County District Attorney, but You Don't Want Him

Gascon is co-author of Proposition 47, which demoted many crimes from felonies to misdemeanors. 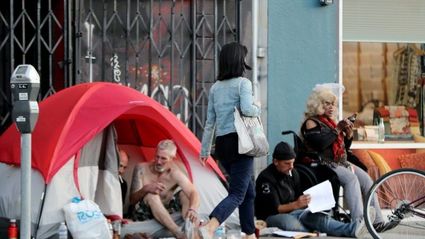 Homeless people lining a San Francisco street in 2019. Gascon did much to fuel the homeless crisis by writing Prop. 47

UPDATE: After winning election as the District Attorney for the County of Los Angeles by 53.53%, Gascon has set about doing every single thing he promised in the below article. While 53.53% may sound like a lot, it leaves a possible 4,647,000 people extremely unhappy with his policies. He hardly has a mandate and will soon discover as much.

George Gascon, a Havana-born former police officer, resigned his position as San Francisco District Attorney in October, at the same time announcing his intention to run for the same office in Los Angeles County.

It is unclear what Gascon thinks he has to offer Los Angeles after he made such an infamous mess of San Francisco. Does he want to bring soaring property crime and out-of-control behavior by the drug-addicted homeless to Los Angeles County, too?

Oh, wait a minute. He already did.

Gascon is co-author of Proposition 47. This law, disingenuously titled the "Safe Neighborhoods and Schools Act," demoted many crimes from felonies to misdemeanors. This is the legislation that allows criminals to walk into a store or open a car door and steal up to $950 without getting charged with a felony. In reality, such offenders rarely see the inside of a courtroom. If they are caught, they are released with a mere citation.

Great deterrent against future shoplifting. Makes life a lot easier for the drug-addicted who choose to live on our city's streets. They can now walk into any grocery store they like and help themselves to food. They can walk into REI and find a nice tent to erect on a sidewalk. No cash needed!

Gascon has been less than forthcoming about his reasons for resigning his San Francisco DA gig to go for the one in Los Angeles. He was initially appointed DA of San Francisco when Kamala Harris left the position to take her new office as California State Attorney General in 2011. He won reelection twice but had announced earlier this year he was not going to run again in the next election, which was said to be "hotly contested" by the San Francisco Examiner. At the time, Gascon claimed his mother's failing health meant he needed to be closer to his family.

But apparently his mother's poor health will be no bar to Gascon taking on the DA job in Los Angeles. Perhaps her health recovered?

Or perhaps Gascon simply always wanted the more prestigious job in the bigger county? And he was willing to resign before he was through with the job he was elected to do in order to be able to run in the March election for Los Angeles DA?

Gascon's claims for deserving the job appear to rely on spin and outright lies. Gascon bills himself as a criminal "reformer." He retroactively expunged the marijuana convictions for every case since 1975. That's fine, but he opposes money bail. And he's thoroughly proud of Proposition 47.

Gascon claims his criminal justice reforms actually reduced crime in San Francisco. In his letter of resignation, he wrote "nine years later violent crime is at an all-time low, property crime is falling, and San Francisco has reduced racial disparities by half while thinning its jail population."

This claim is patently false. According to city-data.com, rapes, assaults, burglaries, and thefts are all up since Gascon took office. Rapes are more than twice what they were in 2011. Thefts went from 2,983 per 100,000 people to 4,461. The overall crime index for the city went from 388.7 to 465.3. According to areavibes.com, San Francisco's violent crime rate is 54 percent higher than the rest of California. It is 82 percent higher than the national average. Property crimes are 152 percent over the national average.

Criminal justice reform, at least as practiced by George Gascon, most assuredly does not work. His claims are untrue. (So he's a liar on top of a terrible DA.)

Even San Francisco's mayor, London Breed agrees that Gascon was a disaster, as does SF City Attorney Dennis Herrera. Both announced their endorsement of current Los Angeles DA Jackie Lacey for reelection. Mayor Breed is quoted by the LA Times as saying Lacey "effectively navigated the delicate balance between keeping our communities safe and enacting meaningful reform." Meanwhile, SF City Attorney Herrera said Lacey "knows how to balance reforming the system while ensuring that violent criminals are off the street and neighborhoods are kept safe."

In other words, Gascon's colleagues back in San Francisco consider him unable or unwilling to keep criminals off the street. In fact, Breed explicitly complained about the "endless cycle of people getting arrested for dealing drugs or breaking into cars, only to be released back out on the streets" when she filled Gascon's vacant office.

But Gascon's past record of allowing lawlessness and crime on the streets is not enough for him to recommend himself for the chief law enforcement officer of Los Angeles County. Oh, no. He has many new "reforms" he'd like to bring us. He wants to eliminate enhancements for gang affiliation. Because it would be a good idea to remove tools in a prosecutor's belt for suppressing the 600 criminal street gangs in California. Because we would all like to return to the 1986, when in Los Angeles County alone there were 328 gang-related murders - and then 80 percent more the next year. 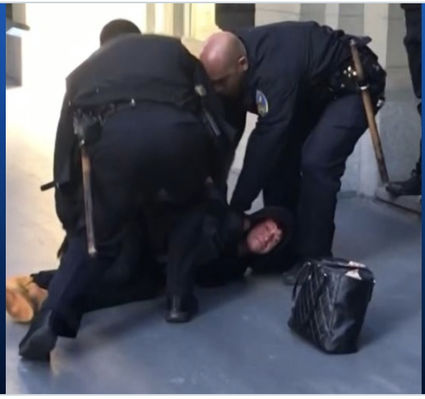 Police in San Francisco moving a homeless man off a sidewalk in 2017. Today, authorities would just let him lie there, because lying on a sidewalk is no longer criminal conduct.

But that isn't all. Gascon wants to go easy on drunk drivers. He proposes that if you drive with up to twice the legal limit of alcohol in your blood, you should get a therapeutic diversion rather than jail time. Hot damn! If you like going out to bars at night and driving home drunk, this man is for you.

Gascon also wants to hire immigration attorneys for illegal aliens to make sure they aren't charged with crimes that could get them deported. You read that right. If you're in the country illegally and commit a serious crime, the sort that could get you deported, you won't be charged with it. You get away with it. Just don't try doing the same crime if you're a legal citizen. One law for them, another law for you. What more would you expect from the county's chief law enforcement officer? Justice?

George Gascon was a disaster for San Francisco. He will be a disaster for any jurisdiction foolish enough to vote to put him in office. Let's not be those fools.