By Jewels Solheim-Roe
Special to the Observer

the magic of Westside's Nutcracker tradition has helped keep spirits and hopes alive during this unprecedented local, national, and worldwide health crisis. 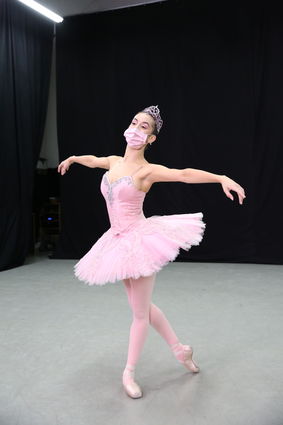 Stella Grynberg (17), a Senior mathematics whiz at Archer School for Girls, performs the starring roles of both the Dew Drop Fairy and the Sugar Plum Fairy: "This unconventional performance of The Nutcracker illustrates my burning passion and love for ballet that I would not let die down during this pandemic. With the grit I have gained from 11 years of ballet training, I refused to stop dancing during the lockdown, and dancing in a mask is second-nature now," shares Grynberg.

For 47 consecutive years, Southern California's longest running production of The Nutcracker has delighted audiences of all ages. This year in the age of Covid – with renewed determination, grace, and grit – Westside Ballet of Santa Monica will bring to life selected pieces from Tchaikovsky's beloved score for all to enjoy, albeit in different ways––virtually and in masks.

"Kingdom of the Sweets," Westside Ballet's abbreviated 2020 Nutcracker, will be showcased on Vimeo on Friday, December 18th.

Several beloved characters: the Sugar Plum Fairy and her Cavalier, the Dew Drop Fairy, the vibrant Arabian and Spanish dances, and the beautiful Mirlitons, will be brought together, yet while staying apart.

Volunteer Guild President Richard Tahvildaran-Jesswein states, "We hope that our loyal audiences who have attended our sold-out performances year after year at the world class Broad Stage of Santa Monica will tune in to Vimeo December 18-31 to enjoy solo rehearsals previously filmed in an open-aired setting. I can honestly state that for our close-knit ballet community, the magic of Westside's Nutcracker tradition has helped keep spirits and hopes alive during this unprecedented local, national, and worldwide health crisis."

Virtual Performances will be released Friday, December 18th and be available to watch online until December 31st.

In addition, Westside Ballet's Nutcracker "Winter Wonderland" Open Air Market was constructed outside the Westside Ballet Studios in Santa Monica over two weekends following Thanksgiving. Keeping physical distancing and mask protocols in place, the Volunteer Guild's boutique committee offered a delightful assortment of gifts. A special day of celebration to enhance the 'Winter Wonderland' experience took place on Saturday December 5th, when a small number of dancers appeared in Nutcracker character costumes for socially-distant photo ops for fans of the ballet company. For those who missed it, the committee's Online Nutcracker Boutique continues to offer these unique gift Items throughout the month of December while supplies last. Offerings include nutcrackers of all shapes, sizes, and colors, ornaments, puzzles, and more.

About Westside Ballet's The Nutcracker

Pieces performed in "Kingdom of the Sweets" are drawn from Westside Ballet's original Nutcracker, a close rendition of George Balanchine's classical Nutcracker ballet, which in turn pays homage to Marius Petipa's original production in 19th-Century Russia––whilst also taking inspiration from the romanticist E.T.A. Hoffmann's "The Nutcracker and the Mouse King." Westside Ballet's co-founder Yvonne Mounsey danced professionally with George Balanchine, as one of his original New York City Ballet's prima ballerinas. Mounsey brought the Holiday Classic to Southern California in 1973 while adding a few touches of her own artistic choreography.

This production is made possible in part by grants from Los Angeles County, the City of Santa Monica, Pacific Palisades Woman's Club –– and sponsorships from local Santa Monica individuals, businesses, and organizations such as Santa Monica College Public Policy Institute, The Huntley Hotel, Lyft Scooters, Urth Caffe, Morley Builders, and more. WSB is extremely grateful for this continued support of the arts in Santa Monica. 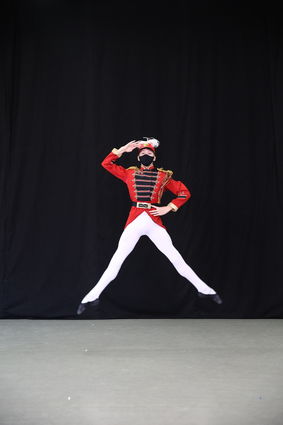 Launched in March during the first shutdown, this immense fundraising serves to keep the school and studios from closing permanently, whilst operating on a skeleton staff. Currently, there are limited online offerings and outside classes running at 25% occupancy. Donations will enable Westside to harness the latest technology enabling them to provide even more virtual instruction to adults and children. All donations to the fund will go directly to sustaining Westside Ballet's extraordinary team of dancers, artistic and support staff. The fund has raised an astounding $170,000 – recently surpassing their original goal of $150,000. The 'Ask' to the community has since been raised to $250,000 – as the original amount was set to cover losses during the first three months of shutdown and the subsequent expectant few months of limited studio classes. As the pandemic is spiking and Westside Ballet is now in their eight month of limited access to studios, utilizing an outdoor dance space and online Zoom classes, the Board of Directors voted to increase the Crisis Relief amount requested, to further ensure the school, in it's 53rd year, will be poised to weather the uncertainty of the pandemic and offer the legendary instruction Westside Ballet has become known for for years to come.

All proceeds from these fundraising efforts will go towards the Westside Ballet Crisis Relief Fund. Westside is looking to engage 1500 Angels to Save Westside School of Ballet.