Just in Time for Christmas, an Angel with a Heart Uncovered on Mars

"As the holiday season swiftly approaches, even our planetary neighbours are getting into the spirit – as shown by this perfect pair of festive silhouettes spotted by ESA's Mars Express."

On Christmas eve 2020, an orbiting laboratory from the European Space Agency called "Mars Express" revealed a photo of a natural formation that looks like an angel on the surface of the Red Planet. Below it is -- what else? a heart shape.

The shape is due to a meteor impact, which revealed different types of soil. Well look--the planet itself is named after a Greek and Roman God. Most planetary objects are named after mythological figures. So why not an angel? 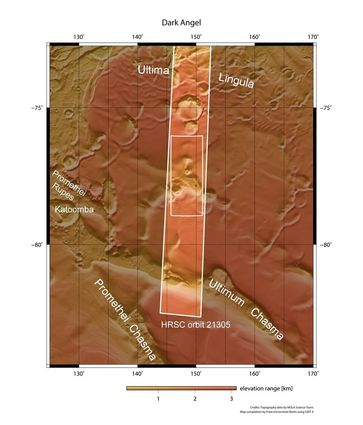 "This image from ESA's Mars Express shows a region near Mars' south pole in wider context. The area outlined by the bold white box indicates the area imaged by the Mars Express High Resolution Stereo Camera (HRSC) on 8 November 2020 during orbit 21305."

"As the holiday season swiftly approaches, even our planetary neighbours are getting into the spirit – as shown by this perfect pair of festive silhouettes spotted by ESA's Mars Express," says the space agency funded by the European Union.

"The defined wings of an angelic figure, complete with halo, can be seen sweeping up and off the top of the frame in this image from Mars Express' High Resolution Stereo Camera, while a large heart sits just right of centre." says http://www.esa.int/Science_Exploration/Space_Science/Mars_Express/Dreaming_of_a_red_Christmas_Festive_features_spotted_near_Mars_south_pole

"These shapes appear to jump out of the light tan - or, in the spirit of the season, eggnog-coloured! - surface of Mars; their dark colour is a result of the composition of the constituent dune fields, which largely comprise sands rich in dark, rock-forming minerals that are also found on Earth (namely pyroxene and olivine)." But we know better, right?