Deputies Lose in Court to Gascon, and He gives Biden-esque Phony Message of Healing and Unity

Judge refuses to grant a Temporary Restraining Order against Gascon, filed by the Association of Deputy District Attorneys, but that doesn't mean the lawsuit is over 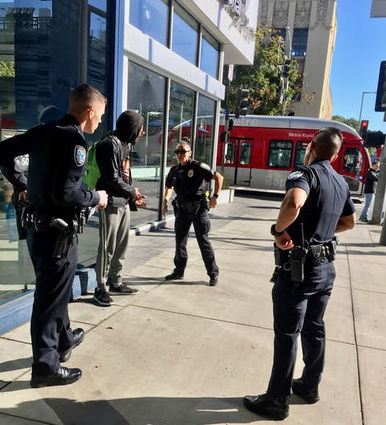 Trespassing is not considered a crime by George Gascon, so the homeless can try to penetrate your home or business with impunity.

UPDATE: The Association of Deputy District Attorneys dispute Gascon's interpretation of today's court ruling as a victory. In fact, says the ADDA, the court ordered Gascon to show cause why an injunction against his behavior should not be issued. Gascon has until January 15 to file papers supporting his position, and a hearing will be held on February 2, 2021.

December 30, 2020 After a month of suffering under the radical leadership of new Los Angeles District Attorney George Gascon, the Association of Deputy District Attorneys sued their boss in court today in order to force him to uphold the law. According to the ADDA, "The suit asks that District Attorney George Gascón follow California state constitutional and statutory law. These laws, enacted by the voters and the state legislature, tested and deemed constitutional by the judiciary, must be respected by the executive."

Gascon had campaigned on a judicial reform platform and acted on his campaign promises immediately upon attaining office. He ordered his prosecutors, the deputy district attorneys, to drop all sentencing enhancements, such as gang affiliation during the commission of the crime or using a firearm. But the president of the ADDA said, ""While an elected District Attorney has wide discretion in determining what charges to pursue in an individual case," that discretion does not authorize him to issue blanket policies that violate established law.

Today, a judge denied a Temporary Restraining Order that was requested in the suit. This is not the same as dismissing the case. All it means is that the judge would not immediately force Gascon to change his internal policies until further proceedings and information could be gathered in the course of the lawsuit.

Gascon immediately issued a press release claiming that the judge's action meant the will of the people had been heard. According to "data," Gascon claimed that longer prison sentences for criminals actually harm the community's long-term health and safety. For this reason (the data, which he declines to specify), Gascon claimed he had the right to ask deputy district attorneys to end "excessive sentencing practices." His election meant that "Los Angeles County voters embraced this new, modern approach."

Only that isn't how the law works. And you'd think a district attorney would understand that. The law doesn't work as an interpretation of what the public wants based on the election of a particular political leader. The law doesn't even work based on what "data" might show. (Which, in this case, is highly suspicious.) The law works via legislation created and voted on by bodies of leaders elected for that specific purpose. In some cases such as propositions, laws are created by voters directly. Laws are never created by district attorneys. Laws are supposed to be upheld by district attorneys, no matter what their personal beliefs might be.

In his prematurely boasting press release, Gascon appears to reach out to the prosecutors under his direction, men and women so frustrated with his illegal policies they felt they had to take him to court. Deputy DAs are "public servants who had earned our utmost respect and gratitude," he wrote. He then extended a "sincere invitation to join me in making these much-needed changes."

However, Gascon continued, "the people have spoken, the direction is clear."

Clear as mud. Does our highest law enforcement officer understand where the law comes from or doesn't he?

When your highest law enforcement official has no respect for the rule of law, you can be sure anarchy is on his agenda, which includes creating a crime wave across LA County by de-criminalizing most crimes and putting a revolving door on every police station in the county by eliminating cash bail because it's supposedly discriminatory. If you want to know LA County's fate under Gascon, just look up Philadelphia's DA Larry Krasner who instituted all the same changes there. The same so-called reform is going on in New York City, as well, where murders have doubled to a high not seen since the 90's because criminals are committing new crimes within days of being immediately released after their first arrest. God help the ADDA and LA County. There is no way a tyrant like Gascon with his agenda could get elected, and yet he did. There had to have been funny business going on in that election. No one in their right mind would vote for his alleged reforms.

Gascon isn't in office to enforce the law. He is in office to break down law and order and cow the populace into submission.