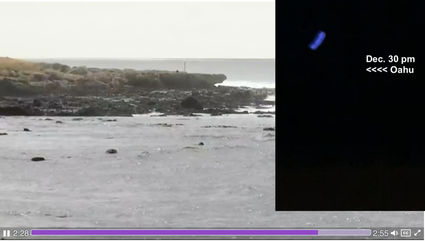 Multiple witnesses reported that saw a large blue monolith shaped UFO in the skies above Oahu. The aircraft, if that's what it was, appeared to drop into the ocean. This would make it an Unidentified Submersible Object or USO, rather than a UFO.

However you designate it, the sighting was one of the clearest and most well documented mass UFO sightings in years, and paranormal types were all over it. "UFO Lives Matter!" tweeted one. Others noted that it was a perfect ending to a unique year.

The sighting happened about 8:30 p.m., reports NBC News Oahu. "There are multiple videos of what appears to be a glowing‚ oblong mass - both in the sky and in the water," said NBC 12 in Oahu.

Officials from the Federal Aviation Administration report no aircraft incidents or accidents in the Leeward Oahu area at the time. Multiple witnesses reported seeing a large blue object fall out of the sky and into the ocean.

Misitina Sape told Hawaii News Now she captured the image at 8:26 p.m. near Haleakala Avenue in Nanakuli. Not long after, a woman named Moriah spotted what looked like the same object passing over Princess Kahanu Estates. 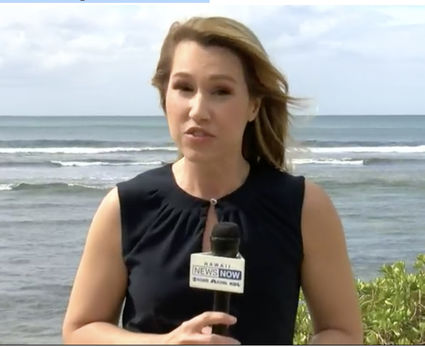 "An unidentified flying object spotted in the evening sky over Leeward Oahu prompted witnesses to call 911 on Tuesday. The sighting happened about 8:30 p.m. There are multiple videos of what appears to be a glowing‚ oblong mass," reports the CBS Evening News.

There have been numerous sightings of monoliths in 2020, starting with a silver monolith about ten fee tall and 3 feet across discovered in Utah's Red Rock Desert. That monolith disappeared one night, reportedly disassembled by a mysterious crew of men in black who took the triangular metal monolith apart in pieces and drove it off in a truck.

Since then, monoliths have been reported in California, Romania, and the UK. Some have suggested that they are scout craft for an alien civilization. We have also reported on monoliths NASA has photographed observing the International Space Station, and on the Martian moons Deimos and Phobos. None of the 2020 monoliths have been adequately explained.

Science does not remove the terror of the Gods!

I think it’s time for the truth about extra terrestrials ,ufo’s ,little green men etc.open up all files,public,private government and Evan top secret and beyond , show us how far and how deeply we have been deceived hopefully there’s time for a recovery