"All election funding, outside a candidate's personal wealth, in all elections shall originate from eligible voters in the district served by the election and donated since the last election to the same office." 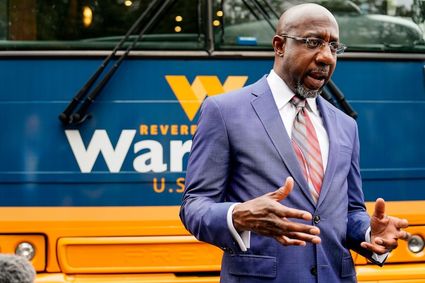 The most expensive U.S. Senate race in history was that of incumbent Sen. Lindsey Graham and his Democratic challenger, Jaime Harrison, where between the two $238 million was spent in South Carolina prior to November 3, 2020. In the third quarter Harrison alone raised $57.9 million which became the record for a three month effort-until now.

The vast majority of this money for the Georgia races comes from non-Georgians. So who is purchasing Georgia's Senators-certainly not Georgians! Since disclosure of big donors is not required until the end of January, long after the vote, we do not know but again, it is not Georgians.

No one but Georgians should purchase this or any other Georgian election. This should never happen but will again until blocked by an amendment to the U. S. Constitution. Why, because politicians love to be purchased.

LibertyUnderFire is the lead advocate for ending outside influences in other state's elections and thus offers the following new amendment to the U.S. Constitution to stop it. "All election funding, outside a candidate's personal wealth, in all elections shall originate from eligible voters in the district served by the election and donated since the last election to the same office."

Remember Michael Bloomberg's boast in the February 25, 2020 Democratic Party Presidential debate of having elected 21 members of the House of Representatives in 2018 giving the House back to the Democrats. This made Nancy Pelosi Speaker again (Dan Merica, "Bloomberg catches himself from saying he 'bought' House races in 2018," CNN, February 25, 2020).

But Bloomberg is not alone in purchasing elections, for some time we have been reporting the influence of the moneyed elite, the billionaire club, notably Michael Bloomberg, George Soros, and Tom Steyers, in choosing our elected officers from the White House down to local races. This happens when money flows in from outside where the candidate will serve allowing those of wealth, to replace constituent influence thus effectively purchasing the representatives from outside the voting districts. If constituents have lost their power to decide their leaders, how can we pretend that we have a democratic republic? It used to be that Democrats opposed billionaire influence in the elections. Today they openly embrace it.

Big Tech companies (Google, Microsoft, Amazon, Apple, Twitter, and Facebook) combined gave more than $50 million in the 2020 election cycle, all heavily weighted, 75% or more, for Democrat candidates and all heavily funded Joe Biden for president ("Big Tech and CEOs Poured Millions Into The Election. Here's Who They Supported," By Sissi Cao and Jordan Zakarin, Observer, 11/02/20).

Propositions are a part of most elections and can be considered without attachment to a candidate. This would not stop the funding or creation of ads for or against a candidate, or ballot issues, so long as ALL monies used in such originates from voters within the district served by the candidate. The word originates is designed to stop donation transfer from outside district sources to inside donors to circumvent the amendment.

Why have we not stopped this? Because both political parties benefit from it. On the congressional level, those holding "safe seats," as for example Democrat Nancy Pelosi and Republican Kevin McCarthy, can either buildup gigantic arsenals to "nuke" a threatening contender, or worse, handoff their unneeded donations to a like-minded candidate in another state to favorably impact elections often adverse to the will of its citizens. This outside funding has to stop.

More funding allows more signs and literature to be distributed, and more newspaper, radio and television ads to destroy an opponent or get a message out resulting in a higher probability of winning. Candidates with the most money and publicity usually win and the rich, by their funding, select contenders long before the people vote, therefore they dominate the result. In many cases more money originates from outside a voting district than within. If no candidate could receive money from outside his/her district, it would stop much influence peddling.

Under this amendment the Clinton Foundation monies could not be used to influence elections as much of that money comes from international contributors. No contribution could be made to influence any contest to which the contributor could not personally vote. This amendment would limit the billionaire class to the "purchase" of only THEIR congressman, senators, governor, mayor, district attorney and etc-not a large group of them.

Congressmen from "safe" districts could not "handoff" their unneeded donations to a like minded candidate in another district. Nor could they holdover funding from previous victories to "nuke" a future opponent. Contributions are a form of voting, normally intended for this candidate only, and for this election only, and they could only be accumulated since the last election for that office.

Dr. HDr. Harold W. Peasearold Pease is a syndicated columnist and an expert on the United States Constitution. He has dedicated his career to studying the writings of the Founding Fathers and applying that knowledge to current events. He taught history and political science from this perspective for over 30 years at Taft College. Newspapers have permission to publish this column. To read more of his weekly articles, please visit http://www.LibertyUnderFire.org