By Eric Smith
Special to the Observer

Peak Bagging In the New Mexico Wilderness With Leroy the Dog.

He's getting older and so am I, but we watch the stars and the rabbits together 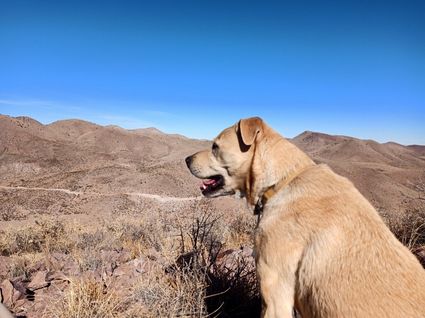 Peak Bagging In the New Mexico Wilderness With Leroy the Dog

This winter I've been driving places to go Peak Bagging with Leroy the Dog.

Two hours south of Albuquerque and just south of Socorro NM, we climbed 3 peaks 1800 feet of vertical gain. It was sunny and the air was clean and beautiful.

Leroy is a wonderful dog, but he's maybe a little older now, and so am I. We have had to cut it to 3 peaks over 7 miles. We used to do almost twice that. He's very gung ho, looking around for animals and watching them run.

Leroy's big on rabbits. We saw giant desert hares, desert cottontail . The Hares run 40 miles an hour, even when he was young he couldn't catch them.

There's a sense of accomplishment being a Peak Bagger. You can track all the peaks you catch in a year. I had 214 peaks last year, over 300 feet of prominence. That's a measure of a peaks essential characteristic. That put me 34th in the nation on peakbagger.com, which has an app you can download. The top dogs do like 700 peaks per year. 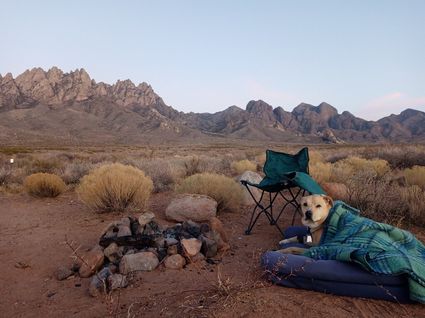 Leroy and Eric camping near the Organ Monument

Every peak has a parent peak connecting it with a ridge. Prominence means it sticks out from its surroundings, so a prominent peak dominates its surrounding. You can see forever.

It's was sunny and temperatures in the 60's or 60's. You walking on the desert, there are rocks reflecting the sun. Leroy and I share water, one quart, and one gatorade. It wasn't enough today, it was too hot.

New Mexico's Organ Monument is a beautiful area, the peaks look like organ pipes. Those are really tough peaks, but they're incredible. Leroy has his own bed, I put a blanket on him and light a fire. It gets cold at night. We sit and talk about old times, neither one of us mentioning politics or Covid-19. But we hang out by the fire and watch the stars go up. Then we both go sleep in the car.

It's what peak baggers have to do.