The first FM signal ever detected in space, it may originate from a monolith photographed on the surface of Jupiter's largest moon 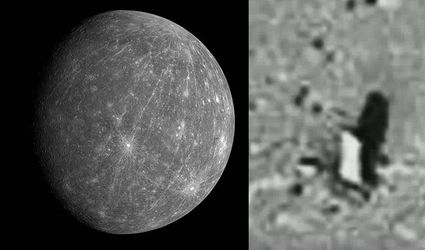 The Juno spacecraft orbiting Jupiter has detected an FM radio signal coming from the Jovian moon, Ganymede. This is the first of its kind discovered. Reports are that it originates from a monolith photographed on the surface of Jupiter's largest moon.

What exactly was the content of the five second signal from the surface of Ganymede? NASA hasn't released that yet. Juno was traveling across the polar region of Jupiter, where magnetic field lines connect to Ganymede, and that’s when it crossed the radio source. Scientifically, it is called a “decametric radio emission.”

Juno is a NASA space probe orbiting the Jupiter planet. It was built by Lockheed Martin and is operated by NASA's Jet Propulsion Laboratory. The spacecraft was launched from Cape Canaveral Air Force Station on 5 August 2011, as part of the New Frontiers program. Wikipedia says it entered orbit of Jupiter on July 5th, 2016, with a planned mission life of 7 years.

Ganymede is the largest satellite in the solar system, bigger than both the planets Mercury and Pluto, and two-thirds bigger than Mars. It is also more than twice as massive as our moon, making it the most massive of all planetary moons in the solar system. Based on its mass and diameter of 5,269 km, it should have been a planet, but since it orbits a planet and not the Sun, it is classified as a moon. 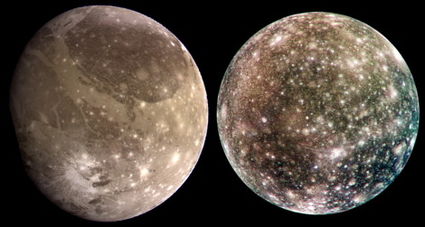 Ganymede is the only known solar system satellite that has its own magnetosphere, and although it is very weak and barely detectable, it is thought to have been created by convection currents in the molten iron core of the moon. Detailed studies of the moon's magnetosphere are made very difficult on account of the fact that much of it is drowned out by Jupiters' much stronger magnetosphere.

As with many other solar system moons, most investigators are of the opinion that Ganymede may have an ocean of liquid saltwater buried deep beneath its rocky surface. In fact, recent studies suggest that this ocean may consist of several layers of saltwater, which are separated by thick layers of ice in different phases, and that the deepest liquid layer may directly overlay the moon's rocky mantle.

Although the moon is massive enough to retain an atmosphere, the atmosphere is exceedingly tenuous, and while it does contain oxygen, the oxygen content is too low to sustain life as we currently understand it.

Was it a “Classic Rock” FM station?