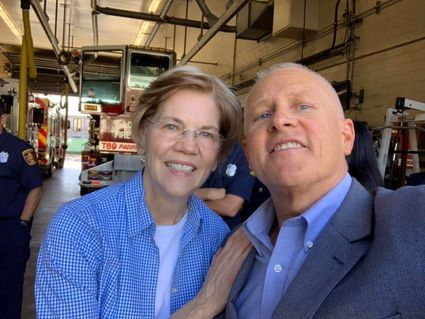 Mike Bonin and Elizabeth at a fire station in 2018

Los Angeles City Councilman Mike Bonin continued his attack on the city's police union January 12, with an emailed statement claiming the police union alone is standing in the way of the metropolis regaining financial solvency. According to Bonin, the Los Angeles Police Protective League, alone of all employee unions in the city, is refusing to delay taking contracted pay raises. The Los Angeles Police Protective League quickly released their own statement, which saw matters quite differently. According to LAPPL, they alone of the employee unions have not yet seen the pay raises that other groups have received.

The dispute centers around a 4.75% pay raise that was promised to most city employee unions, including both the fire and police unions. In July of 2020, the police union agreed to only take 1.5% of that raise due to the financial emergency caused by pandemic lockdowns with their consequent collapse in tax revenue from businesses that the city and county governments had closed. While it may be true that other employee unions are delaying FURTHER raises, they all already received the 4.75% raise that the police officers have yet to see. Now the police union would like to get the remaining 3.25% increase in salary the were promised - and that everyone else already got.

In his email, Bonin wrote, "My fellow elected officials and I want to choose fiscal responsibility and public safety -- but the police union is standing in our way." The implication is that if only the police union would agree to forego their pay increase, the city would have no more financial problems. This is patently untrue. Every government in California is suffering from the loss of revenue attendant on a protracted lockdown and closure of thousands of businesses.

Bonin makes yet another specious claim, "Because the Los Angeles Police Protective League (LAPPL) refuses to discuss delaying raises, the Los Angeles Police Department (LAPD) is beginning preparations to lay off hundreds of police officers." In reality, the city council voted to cut $150 million from the police department's budget. This was part of the idealistic "defund the police" movement that swept progressive areas of the country. Somehow, cutting funding to the police and reducing officers on the street was supposed to bring about more public safety. Apparently, a police presence increases crime.

Oddly, in his January 12 email, Bonin does not appear to remember that he'd wanted less police officers on the street. It is a convenient amnesia when he wants to blame the police union - instead of himself and his fellow councilmembers - for a reduction in patrols and investigations into robbery and homicide. "The police union is choosing to cut neighborhood safety," Bonin writes - as if he'd had nothing whatsoever to do with a $150 million funding cut. It's as if he'd never hosted Melina Abdullah of Black Lives Matter to a Town Hall and discussed "reimagining" public safety, which is a euphemistic way of saying get rid of the police. 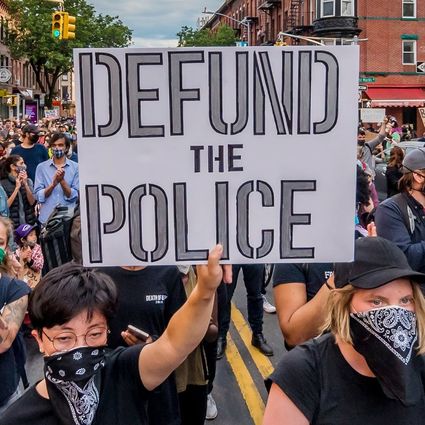 Black Lives Matter started a Defund the Police movement that is supposed to stop police brutality; protests and riots occurred all summer with this theme

The Los Angeles Police Protective League do not have as faulty a memory. "The City Council's decision to defund the LAPD by $150 million last year also eliminated 255 officers from our ranks," Craig Lally, LAPPL President, wrote in a press release. He disputed Bonin's accounting. "As of today's date, police officers have not received the equitable compensation compared to other public safety employees," Lally wrote. Police officers had their pay cut 7.5% in July 202, according to Lally, when cash overtime was eliminated. Should officers now be forced to forego the raise they were promised, it would be akin to taking a 10.75% pay cut, "which is far in excess of what any other City employee group has been asked to sacrifice." Lally goes on to claim, "The LAPD was the first group to contribute to the cause, and our officers have contributed the most."