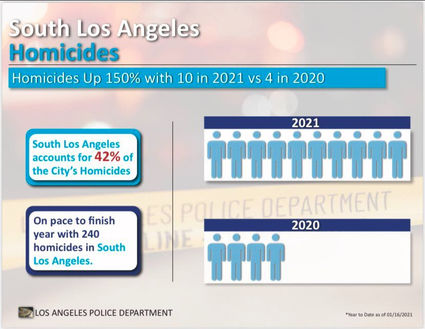 Los Angeles (CA) Last night, Chief Michel Moore released new statistics on the shocking increase in shootings so far this year, compared to last year, with South Los Angeles suffering from the largest impact in the surge in violent crime (as shown in the LAPD charts above). The Los Angeles Police Protective League issued this statement in response: 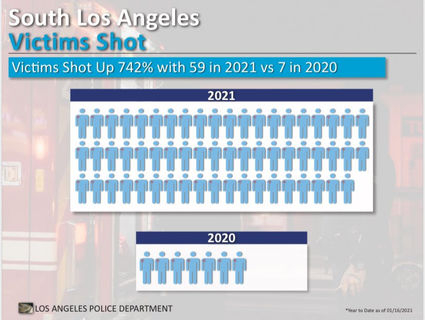 "Police reform," including police pulling back from making arrests, reduction in officers, and downgrading of crimes to zero punishment does not appear to be working in lifting the quality of life in the inner city.

"Two pandemics are ravaging Los Angeles right now; both are dangerous and deadly. COVID is spreading rapidly in L.A. while shooting victims are up 742% and homicides are up 150% in South Los Angeles. Just as the Coronavirus is disproportionally impacting our Black and Hispanic residents, South Los Angeles accounts for 42% of this year's homicides and that part of our city has experienced 59 people shot, nearly four people a day.

As gun violence-ravaged Los Angeles last year, and continues to surge this year, the only plan offered by city leaders is to cut hundreds of police officers and put policies in place to take fewer guns off the street. These twin pandemics are destroying families and we urge residents to go to http://www.WhereistheoutrageLA.com and demand a plan from our city leaders to keep LA safe."

Look for those statistics to at least double once LA County District Attorney, George Gascon's no-cash bail policy is instituted and every police station in the county gets a revolving door installed!

Hey Chief, Did you ever think about NOT being a Sanctuary City? It mignt help your problem. Get your nose out of Gacettis butt!!