Here's the basic lowdown: your appointment time is meaningless. No one will ask you about it. Arrive whenever you have the best two hours of the day to kill 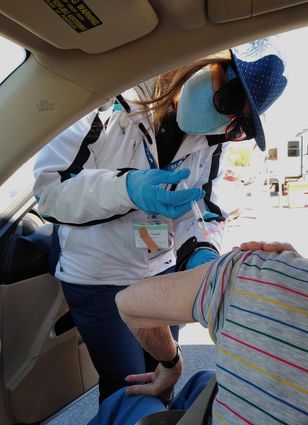 Vaccinations are given as you sit in your car. They take less than five seconds. The line, however, is two hours.

If you're thinking of going to Dodger Stadium to get yourself or an elderly loved one vaccinated, I can give you the lowdown here, having been there yesterday. Let me begin by saying that all of the workers at the Stadium were invariably kind and polite and eager to help. They were working very hard. Having said that, the operation could use the advice of experts in the field of drive-through - and I'm unclear as to why they haven't done so.

Here's the basic lowdown: your appointment time is meaningless. No one will ask you about it. Arrive whenever you have the best two hours of the day to kill - because that's how long it took us. Two hours between arriving at 11:00 am where we joined the back of the line on Academy Road outside the Golden State Gate entrance to the injection in the arm.

As we approached the stadium entrance, a worker asked how many in the car would be getting the vaccination and if the person had any allergies. He then marked the windshield of the car with that information. (I've yet to figure out how to wipe that off.)

Once inside the campus, cars are moved serpentine fashion through the parking lot, as in a line for a popular attraction at Disneyland. If you are driving, you will not have the leisure to work on the laptop you brought or do more than type a quick text on your phone as you must keep moving through the line, a few feet every few seconds.

Why? Why keep cars moving? Why not have people park - there was plenty of room for it - and come fetch a batch for the next round of vaccinations? I expended a quarter tank of gas during those two hours.

Another problem associated with the constraint of continuous moving in a line was the issue of needing a bathroom. If you are by yourself, forget it. No can do. And if you have a driver, then good luck finding your car again after you have finished using one of the few outhouses scattered through the parking lot. I saw an elderly gentlemen wandering through the snaking lines of vehicles searching for his car and driver after having availed himself of the facilities. I hate to think of the germs he picked up in the outhouse, used by any number of people - and all in the service of trying to stay healthy.

Finally, you finish round after round of looping through the parking lot and you graduate to the double-file line of cars heading toward the set of canopies where the vaccinations are taking place. Now matters progress at a faster pace. Soon you will be directed to a line, each about five-six vehicles, set beside a series of canopies. Still, you will be waiting. For what, I am not sure.

Eventually, we were asked to produce the QR code that arrived via email with our appointment confirmation. I was asked more than once if I was getting the vaccine even though I had no appointment myself and am not in the correct age group. I have no idea if they would have given it to me if I'd said yes.

We had agonized before coming to the site about the proper documentation to bring. My elderly relative had brought her driver's license and a bank statement for proof of LA county residence. She was not asked to produce either. All she had to know was her date of birth.

The injection itself was done very quickly by an efficient and kind attendant, who warned my relative even as she was squeezing in the vaccine that she still needed to be careful.

We were then handed her vaccine card - they are giving the Moderna vaccine at Dodger Stadium - and told to make an appointment within 4 days before or after the date stamped on the card. It turns out the website will not allow you to make your appointment UNTIL five days before that date. Again, why? 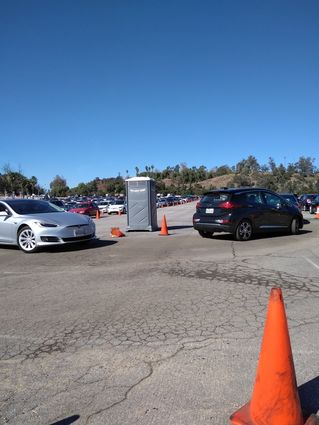 We had thought we would be directed to park elsewhere in order to wait the recommended fifteen minutes in case of allergic reaction. We were not. Instead, we - and the other cars in our short line - waited right where we were for ten minutes. We blocked the ability of the next batch of people who could have been receiving the vaccine. Why?

There is no shame in asking experts in the field for advice and experience. Chick-fil-A can move more than 95 cars through their fast-food lines in an hour. They built a prototype outlet in Atlanta where they experiment on ways to shave seconds off wait times. Seconds add up to minutes, and those minutes add up to more people served and more profit accumulated. The motivation is high for innovation, and they - and fast-food chains like them - have learned a lot about how to move a line. Give them a chance to improve this. More people will be vaccinated more quickly.