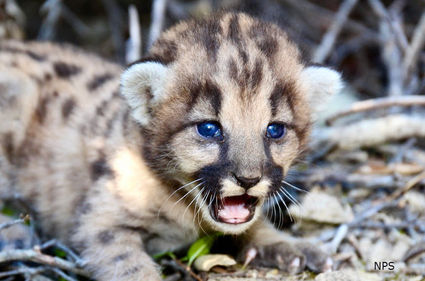 Mountain lions die every year by trying to cross freeways and getting hit by motorists. Their cubs are then left to starve. Wildlife crossings have been found to be astonishingly effective at funneling animals toward safe crossings.

The National Wildlife Federation's #SaveLACougars campaign announced today that fundraising for the wildlife crossing at Liberty Canyon over the 101 Freeway in the Los Angeles area reached a pivotal $18 million-mark last month. This includes a recent $1.4 million gift from a private donor-bringing the project's fundraising to an exciting homestretch and putting the groundbreaking within sight.

"The incredible support of people from around the world has allowed us to advance this project from a visionary idea to an impending reality. This past fall, we released new design visualizations, Caltrans will have the blueprints for the crossing completed this summer, and if fundraising remains strong, we will break ground in November," said Beth Pratt, California Regional Executive Director for the National Wildlife Federation and leader of the #SaveLACougars campaign.

The wildlife crossing at Liberty Canyon is unprecedented in many ways. It is the first urban crossing of its scale, upon completion will likely be the world's largest crossing, and will serve as a model for urban wildlife conservation across the globe.

The crossing also includes the distinction of being the first of its kind in the country to be funded primarily by private dollars. To build this visionary structure and save a population of mountain lions from extinction, the project relies on the generosity of philanthropists, such as an anonymous donor from La Canada Flintridge, California. With her $1.4 million recent gift, she has donated a total of $2 million to the project to date. Her personal interest in the lives of wild animals goes back to 1970 when she and her late husband first went to East Africa. At home, their backyard acreage has hosted most kinds of suburban wildlife: squirrels, rabbits, bobcats, coyotes, skunks, common and rare birds, an occasional possum and raccoon, and one stag. "There is always something to look at, sometimes quite extraordinary," she observes. Her interest in the crossing began, she explains, with reading about the project: "I had long followed articles in the Los Angeles Times about the fatalities of mountain lions in the Santa Monica Mountains trying to cross the freeways that define their living spaces. In 2018 an article reported that Caltrans was working on a design for a freeway overcrossing at Liberty Canyon, but that it would not be financed by the annual budget of Caltrans. So, I wanted to contribute to help make this a reality."

"The Santa Monica Mountains Conservancy and Mountains Recreation and Conservation Authority are excited to enter this last critical phase in making a safe passage for wildlife across the 101 and delivering on 30 plus years of work to preserve habitat linkages. We are so grateful to this donor for her incredibly generous gift to help make this crossing a reality," Rorie Skei, Chief Deputy Director of the Santa Monica Mountains Conservancy

"As someone who has spent a lifetime protecting wildlife, I am inspired by people like this anonymous donor who answer the call," added Pratt. "Her donation-the largest from a private donor to date for the project-advances the crossing significantly. Her incredible legacy-and the legacy of all who donate-will be preventing the extinction of these magnificent mountain lions."

Another long-time supporter, Carolyn Davis, contributed $500,000 to the effort this past December. "This project is especially near and dear to my heart because I live just a few miles away from Liberty Canyon. I love cats of all sizes and am especially inspired by the beautiful and majestic mountain lions. I would encourage everyone to give whatever they can to help ensure a bright future for all of our wildlife neighbors who will enjoy the new wildlife crossing. Hopefully, this will become a model for more wildlife crossings in California!"

Other recent donors to the project include a couple from Kansas who have contributed $675,000 to date after reading about the plight of the Los Angeles area cougars in National Wildlife magazine, along with a resident of the community where the crossing will be located who contributed $250,000 on behalf of the M. Piuze Foundation in memory of its founder.

The generosity of people has been overwhelming, says Pratt, but the campaign still needs leaders in the philanthropic community to invest now and help us break ground in November. "It's critical we reach that goal. We need a hero for these threatened cats, a hero to invest in their future. The mountain lions are running out of time. We have over 3,000 donors from across the world-but we need more to step up so we can break ground this fall. This crossing comes with an unprecedented naming opportunity for a leadership donor-over 300,000 cars a day will travel past it. It's a once-in-a-lifetime chance for someone to help save a population of mountain lions and leave an enormous conservation legacy." 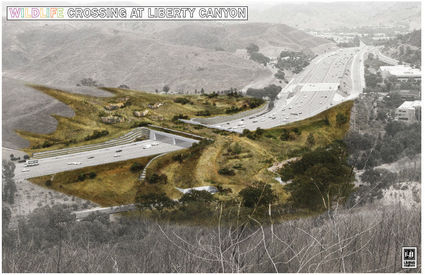 As evidenced from decades of wildlife crossing projects across the world, such as the successful structures in Banff National Park, and the array of animals seen using an overpass in Utah in a recent viral video, wildlife crossings work. The wildlife crossing at Liberty Canyon responds to two decades of National Park Service research, and the need to create a vital connection for the endangered mountain lion population and other wildlife that make their home in the Santa Monica Mountains. In addition to saving the mountain lions from likely extinction, the crossing will also reconnect a long-fragmented ecosystem for all wildlife in an area recognized as part of one of only thirty-six biodiversity hotspots worldwide. As a major green infrastructure project for the state of California, construction for the crossing will generate jobs in the region and economic benefits into the future.

To invest in this once-in-a-lifetime project for the next century that will save a threatened population of mountain lions and revolutionize the possibilities for wildlife conservation around the globe, please contact Beth Pratt at [email protected] or (209) 620-6271. Naming and recognition opportunities are available for leadership level donations.