Reddit Rebellion Gets In Wall Street's Face With Billboards Planned Across America. "Hold the Line on GME!"

"$GME to the moon!" reads a new billboard in Denver, Colorado. Hold your chicken tendies, there are Stonks to buy. 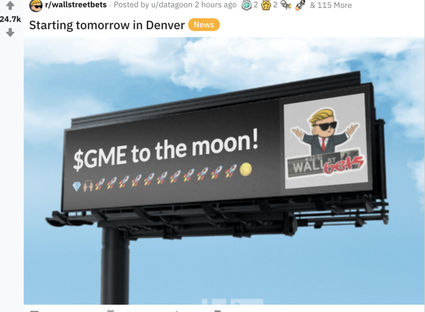 Hold your chicken tendies, there are Stonks to buy.

The newly minted billionaires on wallstreetbets.com/reddit, have gotten really in your face with the hedge fund guys. After attracting the ire of Nancy Pelosi and accolades from everyone else from Sen. Ted Cruz to AOC; they have started buying billboards with the money earned from the world's most massive short squeeze.

"$GME to the moon!" reads a new billboard in Denver, Colorado. Hold your chicken tendies, there are Stonks to buy. What is all this stuff about "My wife's boyfriend" anyway? I wish I knew.

In January 2021, a short squeeze of the stock of the American video-game retailer GameStop and other securities took place on various stock exchanges, causing major financial consequences for certain hedge funds. The short squeeze increased the retailer's stock price by almost 190 times from its record low of $2.57 to nearly $500 per share, causing large losses for short sellers. Approximately 140 percent of GameStop shares had been sold short, and the rush to buy shares to cover those positions as the price rose caused the price to rise further. The short squeeze was initially and primarily triggered by users of the Internet forum r/wallstreetbets on Reddit. 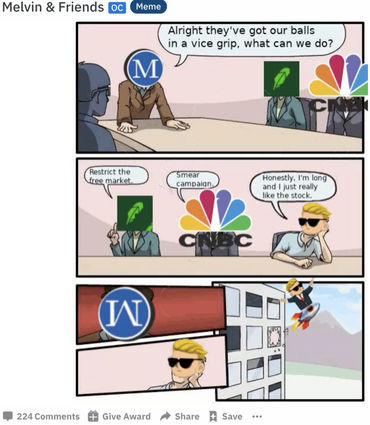 On January 28, multiple brokerages, including Robinhood, halted the buying of GameStop and other securities, later citing their inability to post sufficient collateral at clearing houses to execute their clients' orders. This decision attracted criticism and accusations of market manipulation from prominent politicians and businesspeople from across the political spectrum. Class-action lawsuits were filed against Robinhood in the U.S. District Courts for the Southern District of New York and the Northern District of Illinois.

Many other heavily shorted securities also saw price increases. In reaction to brokerages halting the buying of GameStop and other securities, the total market capitalization of cryptocurrencies also increased.