He had catlike qualities, and feline tendencies. Judge dismissed it in the interest of justice.

An attorney who appeared before the 394th Texas Judicial District had to argue that he was not, in fact, feline in nature. The judge assured him that it was some sort of filter, and that his appearance as fluffy, would not prejudice his client. "I'm not a cat," he argued.

The court released the video to show how "attorneys were struggling to produce justice during the pandemic," and not to poke fun at attorneys. The video has gone viral and is the subject of numerous internet memes. One of them points out that "I'm not a cat," is exactly what a cat would say, if the cat were pretending to be a lawyer. 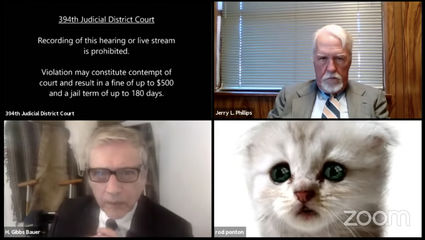