When cars are not parked in a secure area, thieves steal the converters which contain rare earths and precious metals 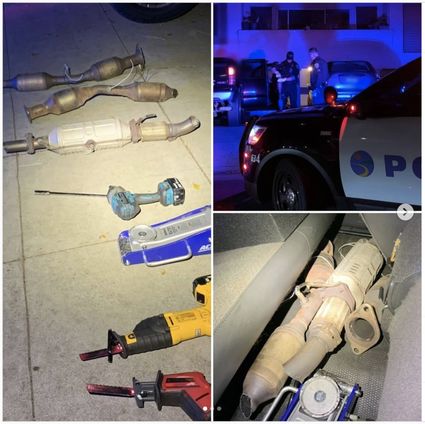 When cars are not parked in a secure area, thieves steal the converters, which are designed to clean automobile exhaust.

The main reason that catalytic converters are stolen is because they're valuable to scrap metal dealers, auto experts say. They contain precious metals, including rhodium, platinum, and palladium.

SUVs and trucks are particularly at risk, with late-model Toyotas and some Nissans being favorite targets. An experienced thief can remove a Catalytic converter in 3-5 minutes.

"Both suspects, Filiberto Sanchez and Juan Manuel Sanchez, were booked for grand theft, receiving stolen property, possession of burglary tools and conspiracy. Due to #LACounty covid-19 jail protocols, the suspects were released and will appear in court at a later time," writes the SMPD on Instagram.

"One way to identify a cat converter's owner is by etching the license plate number of the vehicle directly onto it. SMPD along with Firestone is hosting a free Etch & Catch event on March 10th."

"What the hell do people do with them, sell them to some shop? That sucks so bad for car owners expecting their cars to just work as they start their day but then two (alleged) scumbags completely ruin these people's days and they have to scramble. What if it was some pregnant couple who needed to use their car to get to the hospital or any other emergency," posted one local resident named Jason.

Yes, these people are scumbags. 3 people were busted with converters last week in Santa Clarita... The scrap dealers who buy them are also SCUMBAGS....they know!!! But under Gascon, these lowlife losers will do NO TIME for their crimes. Recall Gascon!!