The Los Angeles County Sheriff's Dept announced today that a 41 year old Sheriff's deputy was killed in a traffic collision in Lakewood. Their press release follows:

On Thursday, February 25, 2021, at 8:58 AM, Deputy Thomas J. Albanese, 41, was killed in an unfortunate traffic collision at the intersection of Del Amo Boulevard and Paramount Boulevard in the City of Lakewood. Deputy Albanese was traveling northbound on Paramount Boulevard, approaching Del Amo, when he attempted to conduct a traffic stop of a vehicle ahead of him.

As Deputy Albanese entered the intersection, he was struck by a sedan traveling westbound on Del Amo Boulevard. The force of the collision was extreme, and Deputy Albanese died instantly. Deputy Albanese was a seven-year veteran of the Sheriff's Department. He started his career with the Sheriff's Department as a Security Assistant in 2013 in the Aero Bureau. In 2015, he took an oath of office to serve his duties as a peace officer faithfully and was assigned to Men's Central Jail. He went to patrol at Transit Services Bureau and then transferred to Lakewood Station as a Field Training Officer. 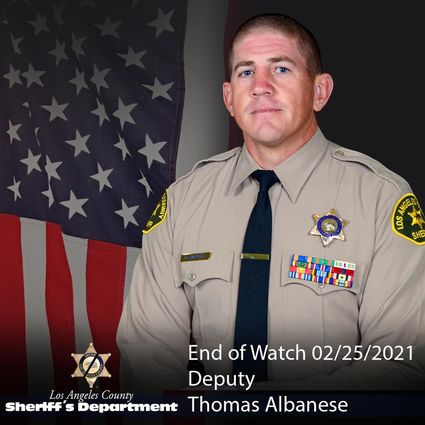 Deputy Albanese's last assignment was as a Pico Rivera Station Motor Deputy but was working overtime at the Lakewood Station when the tragic accident occurred. In addition to his short but impressive career with the Sheriff's Department, Deputy Albanese was part of the Marine Corps, serving from March 2001 through March 2010. He served four tours in Iraq and was highly decorated.

Sherff Alex Villanueva said, "Thomas touched the lives of many people while working in the Department. He received several commendations for his work in patrol and helping the citizens of Los Angeles County."Deputy Albanese is survived by his wife of 12 years, Erica, and his two young boys. He will be greatly missed by all of us in the Los Angeles County Sheriff's Department Family.