Inoculation Rates in Santa Monica, Brentwood Much Higher than in Poorer Communities 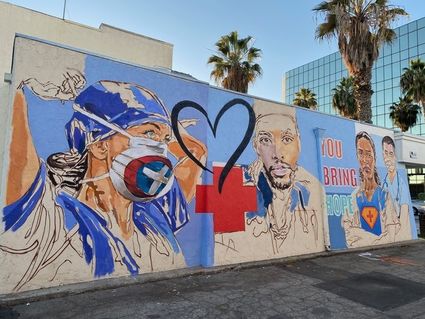 Santa Monica and other wealthy communities in the Westside have some of the highest Covid-19 inoculation rates in Los Angeles County even though their residents were less affected by the coronavirus, according to new data released by the Public Health Department this week.

On the other hand, lower-income communities in the Eastside, which were devastated by the pandemic, have seen fewer vaccines for their residents, health officials said.

The infection rate in these Westside communities ranges from 90 to 145 per 100,000 people – some of the lowest totals in the county.

By contrast, in the eastern part of the County, vaccinations are running less than 10%. In Lennox and parts of South Los Angeles, less than 8% of the residents in the have been vaccinated, and only 7% of Cudahy residents have received their first vaccines.

The infection rate in these Eastside communities ranges from 464 to 550 per 100,000 people – very high numbers in the county.

Analyses by public health officials have found out that low vaccination rates are also the eastern San Fernando Valley, the Antelope Valley, segments of the San Gabriel Valley.

In downtown Los Angeles, the infection rate is 693 per 100,00 people – one of the highest in the county but, so far, roughly 14% of the residents in that area have been inoculated.

As of Wednesday, 9.5 million vaccine doses had been administered statewide, according to the California Department of Public Health. Los Angeles County has administered 2.25 million doses, as of March 2.

This week, teachers and the staff at Santa Monica- Malibu Unified School District began receiving vaccinations through a partnership with Providence St. John's Health Center in Santa Monica in preparation for the upcoming launch of in-person instruction. The staff of 2,000 is expected to be vaccinated within the next 10 days, school officials said.

SMMUSD is planning to start in-person academics and instruction at elementary (TK-5) schools beginning the week of March 15.

"Vaccinating our teachers and staff brings us closer to expanding the reopening of our TK-12 schools as quickly as possible," said Assistant Superintendent of Human Resources, Dr. Mark Dr. Kelly. "We are all interested in the return of students and staff as soon as it is safe to do so."