Protest of the Tigray War At the Federal Building in Westwood.

The conflict over a semitic ethnic minority in Eritrea, has led to accusations of war crimes against both sides. 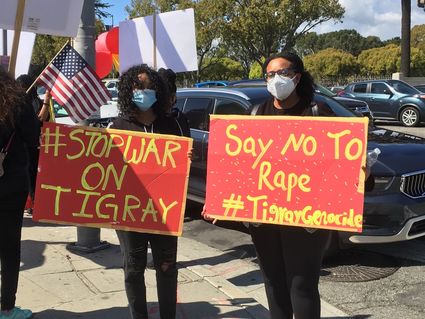 Protest of the Tigray War At the Federal Building in Westwood.

A protest of the Tigray War took place at the Federal Building in Westwood Saturday. The conflict over a semitic ethnic minority in Eritrea, has led to accusations of war crimes against both sides.

The Tigray War is an ongoing armed conflict that began around midnight of 3–4 November 2020 in the Tigray Region of Ethiopia.

It is between the Tigray Regional Government, led by the Tigray People's Liberation Front (TPLF), and the Ethiopian National Defense Forces (ENDF) aided by the Ethiopian Federal Police, regional state police and gendarmerie forces of neighboring Amhara Region and Afar Region with reported involvement of the Eritrean Defense Forces. War crimes have been committed by both sides during the conflict.

To distance the country's politics from ethnic federalism and ethnic nationalist politics, prime minister Abiy Ahmed merged the ethnic and region-based parties of the Ethiopian People's Revolutionary Democratic Front, which had governed Ethiopia for 27 years, into the new Prosperity Party. The TPLF, a politically powerful entity that had dominated Ethiopian politics during those 27 years, refused to join the new party, and alleged that Abiy Ahmed became an illegitimate ruler by rescheduling the general elections set for 29 August 2020 (which Abiy postponed twice before from the regular May 2020 election date, before COVID-19) to an undetermined date in 2021 due to COVID-19. The TPLF, led by Chairman Debretsion Gebremichael, went ahead with regional elections in Tigray in September 2020 in defiance of the federal government, which declared the Tigray election illegal.

Fighting between the TPLF and the Federal Government began with the 4 November attacks on the Northern Command bases and headquarters of the Ethiopian National Defense Force (ENDF) in Tigray Region by TPLF aligned security forces and with attacks by the ENDF in the Tigray Region on the same day, that federal authorities described as a police action.[61][51][62] The federal forces captured the Tigrayan capital Mekelle on 28 November, after which Prime Minister Abiy declared the Tigray operation "over".[8][9] The TPLF stated in late November that it would continue fighting, until the "invaders" are out. 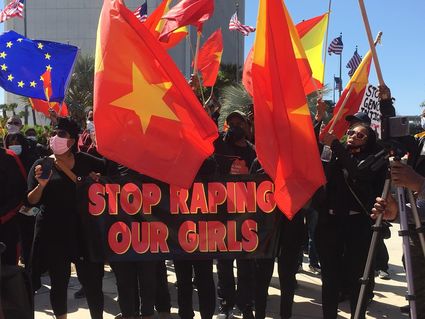 "Stop raping our girls," says the poster. Protest of the Tigray War At the Federal Building in Westwood.

Mass extrajudicial killings of civilians took place during November and December 2020 in and around Adigrat[65] and Hagere Selam,[65] in the Hitsats refugee camp, and in Humera, Mai Kadra, Debre Abbay, and the Maryam Ts'iyon church.

Peace and mediation proposals included an early November African Union (AU) mediation proposed by Debretsion and refused by Abiy;[70][71] an AU trio of former African presidents who visited Ethiopia in late November;[72][73] an emergency Intergovernmental Authority on Development summit of East African heads of government and state that met in late 20 December 2020 in Djibouti;[74] and peace proposals on 19 February by the TPLF[75] and on 20 February by the National Congress of Great Tigray (Baytona), Tigray Independence Party (TIP) and Salsay Weyane Tigray (SAWET).[76]