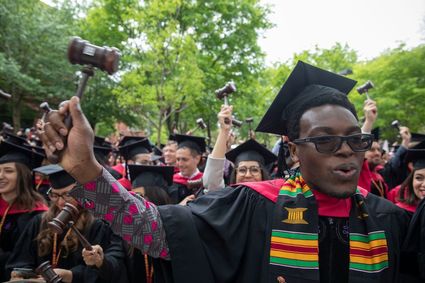 Harvard law school graduates in 2019 in a photo provided by the university; make your own conclusions as to the value they put on minority students

In a document that could have come straight from a reverse version of Jim Crow, "The Whitest Law School Report" ranks 200 of the nation's law schools in terms of the percentage of white students attending and how "excessively White" each school is. A Professor Emerita of Law from the University of Dayton, Vernellia R. Randall measured diversity in law schools by comparing their demographic makeup to that of the state, the region, and the national Law School Admissions Council applicant pool.

"Whiteness was determined by adding Total Whiteness to Excess Whiteness," Randall writes. The scoring is confusing, but she says that Total Whiteness "measures the percentage of White first-year law school enrollment for 2017-2019." Hispanics are not counted as white in her scoring system. She does not say how Asians are counted. "Excess Whiteness is the degree to which a law school is less diverse than the Law School Admissions Council (LSAC) Applicant Pools and state population."

In any case, she ends up with "Whiteness Scores" ranging from 0 to 129. "The higher the score, the more white the law school." (The changes in capitalization of white and White are hers, not ours.)

We are happy to report that such distinguished universities as Harvard, Yale, and Columbia had no Excess Whiteness. We suspect there is a very strong correlation between the ability of high-status law schools to keep down their Whiteness Score and the inability of many other schools to do so.

Professor Randall explains her rationale for the study. "The numerical racial diversity of incoming law school students is essential to ensure that the profession represents members of all communities in America," she writes. Because a lawyer can only properly serve someone who belongs to the same race as themselves? They aren't trained to be professional and do their job regardless of who their client is? If I am white, am I then to avoid hiring a black or Hispanic attorney?

But whatever one thinks of Randall's rationale, her numerical reasoning is deeply flawed. Law schools "often blame a lack of diversity on the available applicant pool," says Randall. She claims that after measuring the difference between the "Whiteness" of a law school's first-year student enrollment and the national, state, and regional applicant pools, this reasoning on the part of law schools did not hold up.

Randall assumes that the diversity of the applicant pool is the same as the diversity of the most qualified applicants. There is absolutely no reason to assume this is true and good reason not to. If the qualified applicant pool matched the diversity of the applicant pool as a whole, all of those "excessively white" law schools would have a more "diverse" first-year class. Tremendous pressure is exerted on all institutions, private and public, to exhibit racial diversity. When qualified candidates appear, they are snatched up quickly. Hence, the lack of "Excess Whiteness" at the most prestigious law schools in the country. Harvard and Yale are going to accept qualified candidates of diverse racial makeup, some of whom would have gone to Pepperdine or the University of San Diego, for example, if they had not been admitted to the more illustrious institution.

The 10 Whitest law schools in the country

Thomas Sowell, an economist at Stanford's Hoover Institution, wrote extensively about the fallacy of attributing racism or other malicious reasons to differences in outcome. "The more narrowly the specific endeavor is defined, the less likely is equal representation of groups to be found, and therefore the less likely are group statistics to be valid indicators of biased treatment." He also warns that the cause of the disparity, such as differences in elementary school education, is often not measured at the same place as the statistic, such as percentage of non-whites in a law school. In addition, "Where there are multiple prerequisites for particular outcomes, whether among people or nature, skewed distributions of outcomes are not uncommon." Admission to law school is a narrow field. The relative qualification of applicants is related to a number of factors that occurred previous to that moment, such as the applicant's earlier educational opportunities, family members who paved the way by also being lawyers, and so on and so forth. There are multiple prerequisites for a successful law school application.

To promote excellence in minority and historically marginalized communities in the United States, Randall would do better to adjure the nation's law schools to adhere to high and equivalent standards for all applicants, regardless of ethnic, sexual, or racial makeup. Then she can turn to and address the possible reasons applicants from certain groups may not be coming up to these standards, such as failing public elementary schools.

Looks like an affirmative action hire did the study. This is what we have to look forward to in professions like law and medicine: people whose thinking is reductionist and politically motivated.