The country has only 364,000 residents, but about ten percent of them drove to see the volcano in Iceland's Southwest corner 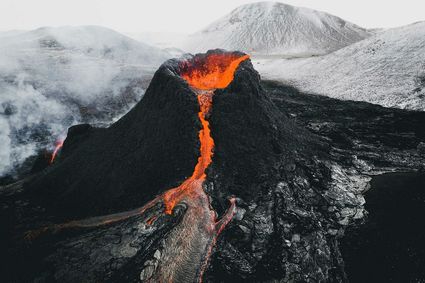 Earth averages two major volcanic eruptions each year. So far this year, the biggest one erupted just 20 miles away from the Icelandic capital city, Reykjavík. Iceland boasts only 364,000 residents. About ten percent of them drove to see the volcano in Iceland's Southwest corner, on the Reykjanes peninsula the weekend of March 20th. At night glowing lava is actually visible from the Capital, where half of Iceland's population reside.

"Following a three-week period of increased seismic activity, an eruption fissure developed near Fagradalsfjall, a mountain on the Reykjanes Peninsula. Lava flow from a 200-meter fissure was first discovered by an Icelandic Coast Guard helicopter on March 19, 2021 in the Geldingadalur area near Grindavík, and within hours the fissure had grown to 500 meters in length," says Wikipedia. "This eruption suggests that more eruptions might start in different fissures once this eruption is over." https://en.wikipedia.org/wiki/Fagradalsfjall

"Instagram poster Gunnar Freyr Gunnarsson notes that he has never seen such a large number of cars in one place in Iceland, on the road to the eruption sites yesterday. An enormously long line formed along the road and photos and videos that Gunnar published of the traffic jam attracted a lot of attention on his Instagram page Icelandic Explorer," writes Gudron Selma Sigurjonsdottir on Icelandic newpaper Morganbladid's website. https://www.mbl.is/ferdalog/frettir/2021/03/24/aldrei_sed_annan_eins_bilafjolda/

Gunnar flew by helicopter to the eruption on Saturday March 20th, but went on a longer trip on foot yesterday, Tuesday. Gunnar says it's nice not to have been able to go on a long journey on foot until yesterday, when the eruption had intensified. "We arrived between five and six in the morning," says Gunnar, who kept a close eye on the weather forecast. He saw the sun rise on the way and says it is indescribable to see the sun directly above the eruption.

"It's a bit steep in one section, but otherwise it's not that bad. Yesterday you saw all kinds of people go there. You saw people with their children, their dogs and also older people. Everyone to see the eruption, just great, "said Gunnar. 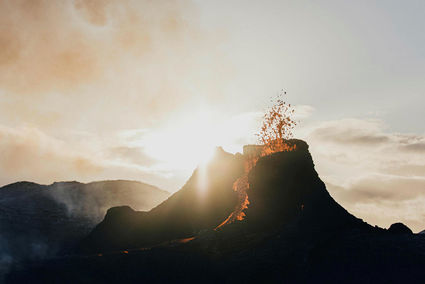 The volcanic eruption visible at sunrise

"The volcano traffic... It's so crazy to imagine that the most cars I've ever seen in one place in Iceland turned out to be in the middle of nowhere. Reason? Thousands using the beautiful weather to visit the volcanic eruption. With everyone focusing on the volcano (with good reason) I think it's fascinating to show some of these moments that aren't "just for the 'gram" but the real life impact. And don't worry - more volcano sizzlers coming soon! #iceland" posted Gunnar on Instagram.