Egypt announces that the Ever Given is moving North, as ship traffic begins to move again in the Suez Canal

Video shows the ship being moved by tugboats, who sound their horns in joy.

3/29: Egypt's President Sisi bragged today (justifiably), about his country's massive technical achievement in refloating and moving the 400 million metric ton Evergreen Ever Given, and moving her out of the place where it had been stuck since Tuesday in the lower Suez Canal.

Breaking Monday Morning Cairo time: “MV Ever Given was successfully re-floated at 04:30 lt 29/03/2021. She is being secured at the moment. More information about next steps will follow once they are known. “ Tweeted the commander of the on scene efforts to move the stricken ship out of the canal. The BBC is reporting that the freighter’s bow is still aground, and that the ship has not been moved yet.

There was no immediate clarity on the crucial question of when traffic in the canal will restart. The ship has a damaged hull and it’s not clear how soon it will be able to clear the way for other vessels to pass, Bloomberg reported.

http://www.isitstillstuck.com "Rick Rolled" people, reporting "It's Free!" and inviting people to watch a video of the moment the ship was refloated. The video actually linked to "Rick Astley - Never Gonna Give You Up" on Youtube. So the blockage continues, apparently.

Update, 3/28: while the Ever Given has been rotated 30° back into line with a Suez Canal, she has dragged rocks from the bank of the canal underneath her bow and she is still aground and immovable. From the BBC:

“Egypt's President Abdul Fattah al-Sisi has ordered preparations to lighten the load of the stranded ship.That would involve transferring some containers to another vessel or to the canal bank. Experts earlier told the BBC that such an operation would involve bringing in specialist equipment, including a crane that would need to stretch more than 60m (200ft) high, and could take weeks.”

3/27: Tugboats honked their horns in jubilation Saturday Night Cairo time, as the 420 million pound, Japanese owned ship full of cargo containers appeared to have been loosened from the banks of Egypt's Suez Canal.

#SuezCanal Authority Chairman Osama Rabie said the #EVERGIVEN /#EVERGREEN ship blocking the #Suez Canal moved slightly, but it remained unclear when it could be refloated

Evergreen shipping lines' Ever Given, a Panamanian registry freight carrier that is one of the largest ships ever built, has been stuck near the south entrance to the critical Egyptian waterway Tuesday night. The critical waterway is completely blocked as a result.

Arabic language video, which is embedded here, shows the tugboats sounding their horns in joy at the apparent freeing of the leviathan ship.

The giant vessel, 1/4 of a mile long, had been buffeted by a sandstorm and strong winds of up to 40 mile an hour winds, knocking her off course. The ship ran aground on one of the canal's banks and became stuck, completely obstructing the canal and preventing any vessels from passing through. 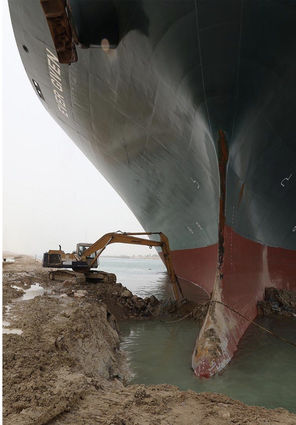 This view of a backhoe trying to free the 420 million pound ship, has become a classic.

By the day after the grounding, at least 15 other vessels were being held at anchorages and at least 237 ships were in line, waiting to pass through the canal while the situation is being resolved. As of 27 March 2021, the vessel was still stuck in the canal. The obstruction is well south of the section of the canal that has two channels, so there is no way for other ships to bypass Ever Given.

Maritime and logistics experts have warned that this incident will likely result in shipping delays of everyday items for customers around the world. Maritime historian Sal Mercogliano told the Associated Press, "Every day the canal is closed ... container ships and tankers are not delivering food, fuel and manufactured goods to Europe and goods are not being exported from Europe to the Far East."

Lloyd's List estimates the value of the goods delayed each hour at US$400 million, and that every day it takes to clear the obstruction will disrupt an additional US$9 billion worth of goods.