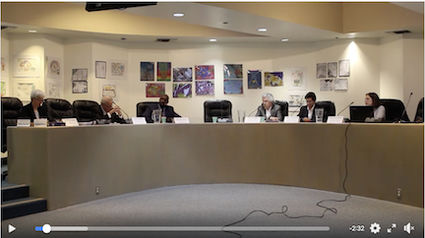 Apparently seeking an alternative to the drive to split Malibu from the SMMUSD, proponents of a recall petition are seeking to recall four members of the Santa Monica Malibu School Board.

"Santa Monica and Malibu Parents Jointly Launch Recall of Four School Board Members", said the group in a press release. The effort is direct against four members of the board: Laurie Lieberman, Maria Leon-Vasquez, Jon Kean, and Richard Tahvildaran-Jesswein. The recall proponents allege "serious malfeasance. Rather than focus on educating students, the board has focused on real estate purchases, construction projects, and fighting parents' lawsuits while failing to give parents, teachers, and school staff a meaningful seat at the table," says the group's press release, dated March 31, 2021.

The recall now goes to the Los Angeles County Registrar of Voters to confirm the proponents and their signatures, writes the group. "Once that is complete, the recall petition can be circulated to Santa Monica and Malibu voters. If enough signatures are gathered, a special election will be held to recall these four board members and vote in competent, suitable replacements."

Santa Monica parent, Kat Blandino writes: "The years of shocking financial mismanagement, conflicts of interest and failing to promote student educational achievement and equity, ultimately fall at the feet of these board members. They have created a culture where not all voices are welcomed -- a culture that is dismissive, divisive, and, in many cases, retaliatory against parents. Our schools, children, and teachers deserve better, and these board members have shown themselves incapable or unwilling to put students' education ahead of their own personal interests."

Another Santa Monica parent, Patrick Acosta, father of a young child and resident of the Pico Neighborhood, added: "Five years ago, Dr. Pedro Noguera released his report finding the SMMUSD Board had failed students of color, and recommended concrete steps the District should take to close the achievement gap. In the five years since, SMMUSD has not implemented even one of Dr. Noguera's recommendations. This Board has failed the students it is supposed to serve."

Among other wrongdoing alleged, the recall "recounts Maria Leon-Vazquez's corruption, which was reported in a series of articles in the Los Angeles Times revealing how she voted to award large SMMUSD contracts to the clients that paid her husband tens of thousands of dollars in consulting fees. Vazquez and her husband have received substantial financial gains for her votes on the school board –– a direct violation of California's Political Reform Act."

"Likewise, the recall points to corruption by current Board President, Jon Kean, and Vice President, Laurie Lieberman – Kean recently voted to have SMMUSD pay his expenses incurred for a political expense without prior approval. They both regularly violate the Brown Act, belittle parents during board meetings, and have misused SMMUSD funds causing structural deficits and insufficient reserves that led to Los Angeles County placing the District under a fiscal stabilization plan. While still under LA County's overview for financial mismanagement, the board bought a $21 million office building at the suggestion of Lieberman claiming it was 'a good deal'."

"Lieberman has diverted millions from SMMUSD to enrich Santa Monica real estate developers," alleges the group, "an industry her husband's current law firm represents –– and to her husband's partner's former law firm where she has approved $7 million to Pillsbury Law firm who was unsuccessful in both the District Court and California Court of Appeals regarding legal action concerning toxic PCBs in Malibu's schools. During her long tenure as a board member, she has diverted SMMUSD's focus from educating students to real estate and construction pushing three major bonds that cost the taxpayers over $1 billion. According to sources on the District's bond committees, Lieberman plans to put up new bonds in the next few years to offset her and the District's mismanagement of prior construction funds. Additionally, Lieberman has created a culture of political retaliation against other board members and against parents who voice their dissent. "

"Richard Tahvildaran-Jesswein has consistently voted on items that benefit fellow board members despite their known conflicts of interest, and ignored the will of the voters to please special interests. He has also voted on matters pertaining to his employer despite his conflict of interest."

The recall petition argues that the leadership failures of these four board members have long-term consequences for SMMUSD students and the City more generally. "They deprive our students of an excellent education, increase socio-economic inequality, fail to close the achievement gap, neglect to hold incompetent administrators accountable, undermine the District's beloved teachers, and hurt the long-term economic viability of SMMUSD," says the group.

We have emailed the SMMUSD members for comment on this story.