History's Most Famous Cats Include Morris the Cat, Unsinkable Sam, And Viking Cats who Discovered the World

A new study reveals that the growth of agriculture 12,000 years ago lead to an explosive growth in cats 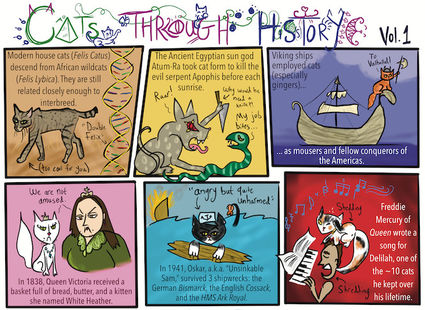 Cats have shared campfires with humans for the last 10,000 years. At one time it was thought that ancient Egyptian priests domesticated the house cat from African wildcats. But when archaeologists discovered an 8500 year old grave on Cyprus containing a young girl and her cat, they knew the relationship went back much longer than the pyramids.

It is also believed that cats decided to move in with us. They "self-domesticated," the only animal ever to do so on a large scale.

In between the Roman Empire and Seigfried and Roy, many individual cats have achieved fame. Improbable, for beings who can't speak or write or post on Instagram. A few are in the cartoon before. Here's a little more information, mostly from Wikipedia.

The cat (Felis catus) is a domestic species of small carnivorous mammal. It is the only domesticated species in the family Felidae and is often referred to as the domestic cat to distinguish it from the wild members of the family. A cat can either be a house cat, a farm cat or a feral cat; the latter ranges freely and avoids human contact.

Domestic cats are valued by humans for companionship and their ability to hunt rodents. About 60 cat breeds are recognized by various cat registries.

Cats likely spread globally until they now live in 37% of American households and outnumber dogs as pets. The study sequenced the DNA of more than 200 cats that lived between 15,000 years ago and the 18th century. The study showed that cats likely expanded across the globe in two waves. The first was Viking.

Viking Cats--New findings suggest that long before cats became household pets, they were the frequent companions of ancient Vikings, in some cases accompanying them as they sailed across the globe.

Analysis conducted of cat DNA retrieved from an early Viking settlement found in Germany suggests that feline is heavily intertwined with that of Vikings, so much so that the latter probably kept them in their homes or on board their ships as they sailed the world.

Samples of DNA from over 200 cats which lived from roughly 15,000 years ago to as late as 300 years ago were published in "Nature," a scientific journal.

The researchers support their conclusion based on information gathered concerning early Middle-Eastern cats. Their growth in numbers resulted from early human agriculture.

Scientists believe that Vikings kept cats around for the same reason. Vikings were also farmers, so they saw the value in keeping mousers at their settlements.

Unsinkable Sam --Unsinkable Sam (also known as Oskar or Oscar) is, according to a possibly apocryphal story, the nickname of a ship's cat who served during World War II with both the Kriegsmarine and the Royal Navy and survived the sinking of three ships.

The crew of the British destroyer HMS Cossack rescued him from the sea following the sinking of the German battleship Bismarck. "Oscar" was derived from the International Code of Signals for the letter 'O', which is code for "Man Overboard" ("Oskar" in German).

The black and white patched cat was on board the Battleship Bismarck on 18 May 1941 when he set sail on  Bismarck's first and only mission.

Bismarck was sunk after a fierce sea-battle on 27 May, from which only 115 from her crew of over 2,100 survived. Hours later, Oscar was found floating on a board and picked from the water by the British destroyer HMS Cossack.

Unaware of what his name had been on Bismarck, the crew of Cossack named their new mascot "Oscar." The story goes that Oscar was sunk and rescued two more times. After the war he lived in a home for retired British sailors.

Morris the Cat:--A large orange tabby tomcat, the character of Morris the Cat is "the world's most finicky cat", eating only 9Lives cat food and making this preference clear with humorously sardonic voice-over comments when offered other brands. Every can of 9Lives features Morris' "signature". Three different cats have played Morris the Cat.

The original Morris was discovered in 1968, at the Hinsdale Humane Society, a Chicago-area animal shelter, by professional animal handler Bob Martwick. 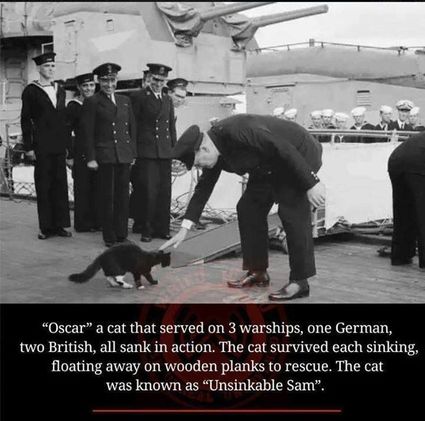 Unsinkable Sam boards a German warship in World War II. He would end up jumping ship and sailing for the allies

Morris won two PATSY Awards (an award for animal performers in film and television) in 1972 and 1973. The original Morris died in 1978.

All cats to play Morris have been rescue animals, either from an animal shelter or a cat rescue. After receiving multiple contacts from individuals who claimed that they were the original owner of Morris, Bob Martwick chose not to reveal which shelter he obtained the second Morris from. After a yearlong search, Martwick selected the second Morris, who began appearing in commercials in 1979,

The first two cats to play Morris lived with Martwick as pets. Morris's popularity continued into the 1980s, with the Leo Burnett Company orchestrating a mock presidential campaign for Morris in 1988.

The current Morris lives in Los Angeles with his handler, Rose Ordile.