There's a Fungus Among Us: Scientists Discover Life On Mars. Maybe.

A few Scientists claim NASA photos show mushrooms growing on Mars. Others say, no, not this time either. 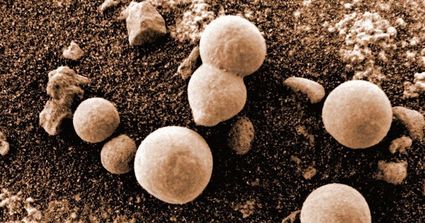 Martian blueberries in this NASA image are thought to have stems underneath them.

A new report on the Researchgate.com website reports on a group of US, European and Chinese researchers who believe the "blueberries" of Mars are not rock formations. They are actually hardy fungi, the report claims. Which would mean there's life on Mars.

The report theorizes that the fungus, or fungi, could be used as food or fuel by future human colonists. Personally, I think I prefer the deep fried mushroom burger at Shake Shack, but I digress. The objects in question show“chalky-white colored spherical shaped specimens,” which the Mars Opportunity team initially said was a mineral called hematite. 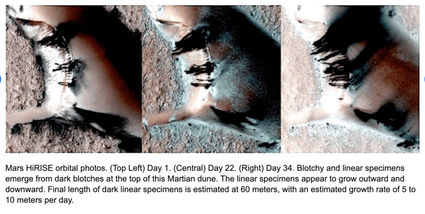 "Mars HiRISE orbital photos. (Top Left) Day 1. (Bottom) Day 34. Linear specimens travel up and over terrain with those in the center growing toward each other. Final length of dark linear specimens is 130 meters, with an estimated growth rate of 5 to 10 meters per day."

The report claims that the fast growing fungi grow up to ten meters a day, as seen on orbital photos taken by the Mars Exploration probe. Fungi on Earth are among the fastest growing life forms. And you can fly a helicopter on Mars. Which doesn't really relate at all, except to say there is a usable atmosphere.

"In their paper, the scientists analyze a variety of images taken by NASA's Opportunity and Curiosity rovers, as well as the Mars Reconnaissance Orbiter's HiRISE camera. Mushrooms could be great for multiple purposes for Mars settlers," says the article which is at: https://www.researchgate.net/publication/351252619_Fungi_on_Mars_Evidence_of_Growth_and_Behavior_From_Sequential_Images

Jackson Ryan doubts it. Writing in Cnet.com, the biologist says: "The "mushrooms on Mars and fungi on Venus" theory is a worn-out, debunked idea that appears like clockwork, about once a year. The headlines certainly are interesting: Imagine if we found fungi on Mars or Venus! It would literally rewrite our ideas about life in the cosmos -- but the articles rarely interrogate the scientific evidence for the wild claims."