City Council Reviews Report on May 2020 Riots in Santa Monica 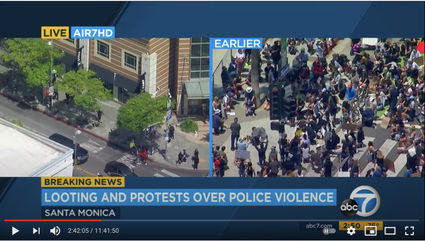 The City Council met this week to review the OIR Group's independent, after-action report on the events connected to the civil unrest in Santa Monica May 31, 2020.

The Group's 116-page analysis does not condemn the Santa Monica Police Department but it does contain 44 recommendations to improve the city and SMPD's emergency response.

At its meeting Tuesday night, the Council directed SMPD to prepare within 60 days a response to the report, setting out a plan for implementation of the recommendations, with priorities being leadership, planning, use of force, and officer mental health. It also directed the newly-created Public Safety Reform and Oversight Commission to prepare a work plan for consolidating other policing issues and additional recommendations for consideration by Council.

Council also directed staff to develop a work plan for an independent evaluation and public reporting on the status of SMPD's implementation of the recommendations. And it approved another directive to ensure that usage of body-worn cameras by SMPD personnel is enforced – a suggestion by Councilman Kevin McKeown.

"It disturbed me that body cameras were not activated on May 31," McKeown said.

"OIR Group's independent analysis is a roadmap to our goal of preventing another May 31," said Mayor Sue Himmelrich. "The Council looks forward to SMPD's report back with a plan for implementation of recommendations and to the work of the Public Safety Reform and Oversight Commission in driving the long-term change we need to rebuild public trust and provide public safety for all."

The 44 recommendations in the OIR report cover policies, training, and best practices for large incident emergency response. They include: "#3: SMPD should develop written protocols to ensure that an operations plan is developed in advance of all potential crowd control situations; and #8: create a tracking mechanism for documenting uses of force in the field."

Other suggestions: "#16: training for supervisors on unlawful assembly should emphasize the need to follow Department policy and reach out to event organizers with the goal of gaining voluntary dispersal prior to issuing formal dispersal orders; and #32: The City should engage with its community in developing guidelines on whether and how curfews should be deployed, particularly when adjacent to First Amendment protected activity."

"The Police Department accepts all of the recommendations contained in the OIR Group's Analysis," said Interim Police Chief Jacqueline Seabrooks. "We certainly understand that our transparency and accountability are crucial to that rebuilding process.  We welcome the opportunity to provide an Information Item response setting forth our plan for implementation of the OIR's recommendations in accord with the Council priorities of leadership, planning, use of force, and the mental health and well-being of our police officers."

Seabrooks said SMPD has taken a number of steps over the past year to improve the department's emergency response. Those actions include: establishing a Mobile Field Force to deal with civil unrest and large crowds; reinstating its Planning and Intelligence Unit, which now serves as a central point and clearinghouse for all intelligence concerning possible threats to the city; and maintained regular contact with the California Office of Emergency Services as well as mutual aid partners to prepare for events that extend broadly across "Area A cities" and Los Angeles County, police officials said.

Many of the 100 businesses looted and destroyed on May 31, 2020 never reopened after the rioting. Most of the two dozen people arrested in connection to the riots did not live in Santa Monica, city officials said.