The entire Westside has seen a flurry of stolen puppies and canines. 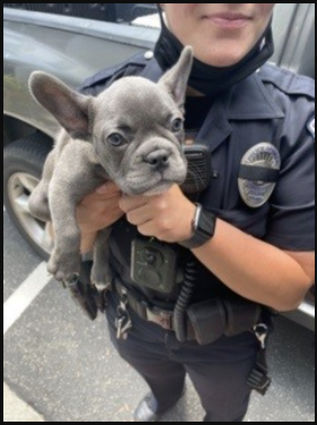 The stolen dog with a proud officer

Culver City police arrested on Saturday a man who allegedly stole at gunpoint a 10-month-old French bulldog in Fox Hills earlier this week.

"The French bulldog was located (unharmed) and returned to its rightful owner," Culver City Police Department said in a press release.

The dog snatcher reportedly responded to an advertisement listing the dog for sale. On Wednesday, May 12, the bulldog's owner agreed to meet the man on the 6000 block of Canterbury Drive around 7 p.m. to make the exchange, according to CCPD.

After the owner placed the puppy in the trunk area of a vehicle, the suspect drew a semi-automatic handgun from his waistband, grabbed the dog and fled on foot, police said.

On Saturday, May 15, Culver City detectives observed the suspect leaving a residence in the Fox Hills.  The suspect, who was holding a gray French bulldog, entered a nearby vehicle and drove away, police said.

"Police officers attempted to stop the vehicle, and a short vehicle pursuit ensued," CCPD said.  "The pursuit ended when the suspect collided with another vehicle near Bristol Parkway and Slauson Ave." The driver and occupant of that vehicle was not injured.

The suspect fled the scene on foot and a perimeter was established in the area.  Police deployed a drone and located the suspect shortly after the chase. Officers arrested him at 2:45 p.m.

Police officials have not yet released the name of the suspect.

This case will be presented to the Los Angeles District Attorney's Office for criminal filing consideration, CCPD said.

In January, 2021 thieves stole 3 French bulldogs from a dog walker who was walking Lady Gaga's dogs. They were eventually recovered and 3 suspects were arrested.