Fire in Pacific Palisades for Second Time This Month 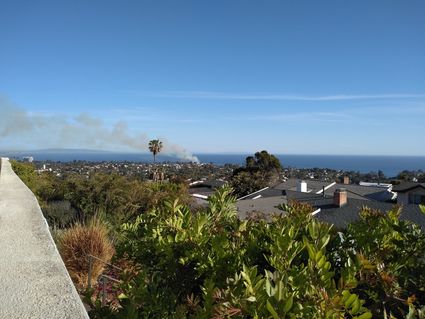 UPDATE: From the Los Angeles Fire Department blog: CONTAINED: Firefighters have hand lines around the perimeter as helicopters continue to conduct water drops to assist with the efforts. The burn area is approximately 2 acres on a steep hillside. No structures threatened and no injuries reported. Crews will remain on scene for approximately two more hours conducting mop up operations and traffic on PCH will remain affected. No further details.

May 24, 2021 - A brush fire is sending up huge plumes of smoke as it burns the dry vegetation that lines the Pacific Coast Highway between Temescal Canyon Road and Chautauqua Boulevard in Pacific Palisades. Helicopters and fire engines are currently battling the blaze which has slowed northbound traffic, which is confined to one lane. 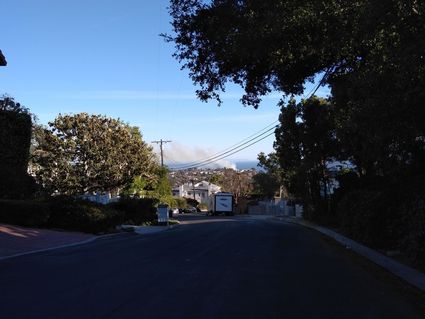 On May 14, three separate blazes were allegedly started by a homeless arsonist on Santa Ynez Canyon Trailhead near Michal Lane on the border between Pacific Palisades and Topanga. That fire caused thousands to evacuate and burned 1,158 acres.

Before the alleged arsonist for the "Palisades Fire" was caught, speculation had centered around a homeless individual, on probation for an arson conviction, who lives in the Palisades bluffs in the very area where the current fire is burning. The Pacific Palisades Task Force on Homelessness had urged officials to take action regarding the man, who paints himself red and is suspected of building numerous fire pits, ready to burn in the bluffs.

The current fire situation is ongoing.