Venice Boardwalk Becomes One Big Homeless Encampment, and the World Begins to Notice

Bewildered locals wonder why they paid millions to live next to squalor. Rumor has it Venice property values have fallen 30%. 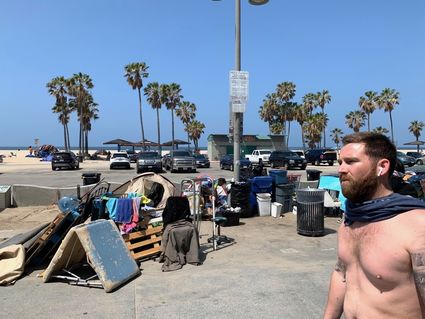 A man walks in front of a Homeless Encampment in Venice Beach.

Venice residents are tired of seeing the once famous, though eclectic, boardwalk turned into one large homeless encampment. And they're talking to the media this week.

For example, the UK Daily Mail writes:  "On Sunday Crocodile Dundee star Paul Hogan, 81, warned the homeless away. 'This is my house, not yours,' he wrote on a note he posted on the gate of his $3.5 million Venice Beach home. Hogan  complained that he is homesick and desperate to return to his native Australia but doesn't want to go through two weeks Covid quarantine. I'm like a kangaroo in a Russian zoo, I don't belong here,' he said.

Venice residents generally assert that homeless people commit many crimes, including shootings, fights, fires and drug use.  Most of them deny that they want to do anything but sit in the sun, same as wealthier, working people. Economics simply forces them to do it publicly.

“The boardwalk used to be full of tourists, vendors underneath canopies, with tourists from Europe and Asia. But not anymore”. On my Thursday morning walk, I pretty much saw only homeless people.

Bewildered locals wonder why they paid millions to live next to squalor. Rumor has it Venice property values have fallen, perhaps as far as 30%.

Fox News reporter Lawrence Jones visited Venice Beach Wednesday. He spoke to both residents and members of the homeless community who set up tents in the area.

One homeless man told Jones that he lost his child and fiancé in a drunk driving incident and started resorting to drugs, noting that he injects himself with "clean" needles around 32 times a day.  "Are you afraid that one time when you shoot up it'll be the last time?" Jones asked. "No, I'm not afraid," he responded. "If it happens that I die, maybe I can finally see my kid."

A homeless man with a blond beard told me he has been living on Venice Beach on and off for approximately five years. He said his name was "Agent F." He claims the homeless residents of the area actually try to clean it up. He claimed that living under the stars allows him to connect with his ancestors, archaic humanoids, who also lived outside all the time.

“You know why none of us get Covid?” He asked me. “It’s because we’re outside all the time.” He felt his lifestyle was stress free and healthy. 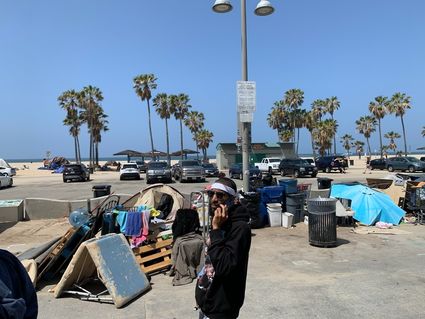 A Homeless Encampment in Venice Beach.

Agent "F" says he is 44 and has travelled the world. He showed me a storage locker a friend rents from a local landlord. He says they do art installations and sometimes sell their craftwork. He says he is completely happy living outdoors, and wants to live that way the rest of his life.

While I was there, a truck from the Los Angeles Dept of Parks and Recreation drove by, with bags of tracks produced by the residents. "You see? We're the ones who gathered all that trash to fill those bags."

“Authorities feel torn beside progressive goals, good intentions, and a demand from people who've paid millions to live by the beach, that the area be cleaned up. And that the homeless be taken away” says the Daily Mail.