By Melissa Toomim
Guest Author to the Observer

An Anti-Semite on the House Anti-Semitism Task Force: Ted Lieu 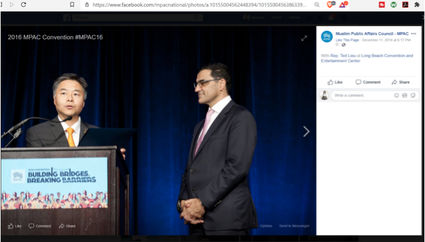 It is oxymoronic for anyone to believe he can simultaneously support HAMAS and consider himself a champion against antisemitism. These two positions are mutually exclusive. Yet, that is exactly the turf staked out by Congressman Ted Lieu, who represents coastal Los Angeles County. Earlier this year, Lieu touted his efforts on the House Task Force for Combating Anti-Semitism. But actions speak louder than committee assignments, and Lieu's actions over the past decade speak volumes.

In 2012, Lieu accepted an award from the Council on American-Islamic Relations (CAIR), whose predecessor entity, Islamic Assn. for Palestine (IAP), was named as an unindicted co-conspirator in the 2007 terrorism finance case, United States v. Holyland Foundation for Relief & Development. Two of IAP's executives were convicted in the Holyland case. Several IAP executives went on to lead CAIR, including Nihad Awad, Rafeeq Jaber, Omar Ahmad and Ghassan Elashi, founder of CAIR-Dallas and convicted defendant in the Holyland case. Moreover, despite claims that it does not support the anti-Israel movement BDS (boycott-divest-sanction), in April of 2020, CAIR launched a Ramadan boycott of Israeli dates. Lieu was advised of CAIR's support for HAMAS by various counterterrorism experts, but refused to return the award. When it comes to the Jewish people and Israel, Ted Lieu and CAIR's leaders speak from both sides of their mouths.

The financial entity that was funneling money from Holyland, IAP and other groups to HAMAS, Islamic Jihad and even al Qaeda, was the North American Islamic Trust (NAIT). Funds were also being funneled through NAIT to and from the Muslim Public Affairs Council (MPAC), another pro-HAMAS group for which Ted Lieu has demonstrated active support, despite being advised of its ties to a terrorist organization whose charter demands the elimination of the State of Israel. 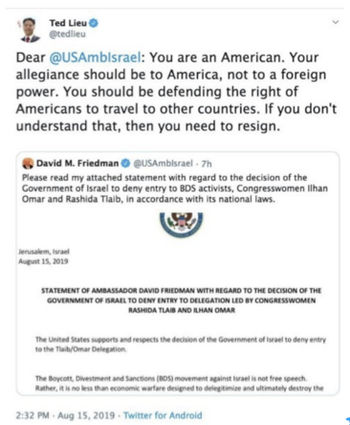 Later that year, when Omar tweeted the common "dual loyalty" trope against U.S. Ambassador to Israel, David Friedman, Lieu imitated her in a tweet of his own and then doubled down by repeating his accusation in an interview with CNN's Wolf Blitzer: "Actually, I think he should resign because he doesn't seem to understand that his allegiance is to America, not to a foreign power," Lieu said. "He should be defending the right of Americans to go abroad to other countries and to visit their relatives." After becoming aware that many of his constituents were offended by his antisemitic tweet, Lieu deleted it and apologized – too little, too late.

How exactly can anyone believe that Ted Lieu is opposed to anti-Jewish bigotry when he continually demonstrates his irrational prejudice against the Jewish people?

Ms. Toomim, Thank you for your superb reporting and facts regarding Ted Lieu’s opportunistic and unethical behavior as a Public Servant of our District-33. It appears he is only serving himself for monetary gain. Ted has lost his way from the oath he took when he was in the United States Air Force and now has a Public Servant in Congress. It’s high time to remove these types of men and women who can be bought by opposing groups and stand in front of the people in his district and lie straight to our faces. I look forward to many more of your articles in the near future. Thank you for speaking the truth.